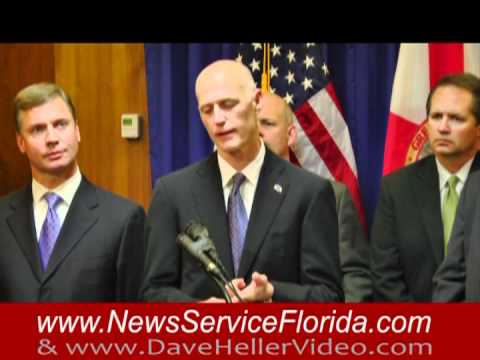 Gov. Rick Scott today signed a bill allowing businesses to avoid paying increased taxes, revenue from which would have gone toward repaying the federal government for unemployment benefits sent out to Floridians.
0
Shares
0
0
0
0

Gov. Rick Scott today signed a bill allowing businesses to avoid paying increased taxes, revenue from which would have gone toward repaying the federal government for unemployment benefits sent out to Floridians.

Senate Bill 1416 renames the state’s unemployment compensation program as a “reemployment assistance” program and provides “tax relief to Florida businesses” for their share of the costs, the governor’s office said in a press release today.

The bill, along with three others, was signed by Scott as part of an event highlighting his economic growth agenda, which consists mostly of tax breaks to business in Florida.

Businesses were expecting an increase in taxes this year in order to pay back the federal government for its $2 billion loan to the state for its Unemployment Compensation Trust Fund, which has been running a deficit due to Florida’s persistent economic woes and high unemployment. But lobbyists for businesses in the state, specifically the Florida Chamber of Commerce, convinced the Legislature to pass legislation that would prevent companies from facing the tax increase. Blocking the increase was a major priority for the Chamber this past session.

Last year, the Chamber was also able to successfully lobby for changes to the state’s unemployment benefits program. The result of its efforts: fewer benefit payments to the unemployed and a reduction in the number of Floridians entering the program.

As I reported last October, Rich Templin, of the Florida AFL-CIO, said that businesses in Florida have been allowed by legislators to not contribute what is “legally their fair share.” According to Templin, while the Chamber argues that last year’s legislation relieved businesses of a burden, it actually hurt small businesses. He said Florida’s unemployment program is an “unmitigated disaster.”

The Florida Center for Fiscal and Economic Policy said in a report today that the new unemployment compensation law allows businesses to shirk their financial responsibilities to the state. The public policy group reports that the bill will save employers “$828 million over the next three years.”

According to the group:

That money must be repaid and the trust fund must be replenished for future unemployment claims. Unemployment insurance is funded primarily by employer taxes, which have increased since the recession. The legislature in 2010 and 2011 made changes in repayment requirements that prevented higher tax rates for employers and delayed the repayment schedule.

The Center for Fiscal and Economic Policy also notes that the bill “does little to actually assist the state’s 900,000 unemployed workers.”

However, Scott said in a press conference today that the state will eventually pay back the money, but he does not want to burden businesses.

“We are paying back the money we owe to the federal government,” he told reporters. ”The business community [was] concerned that we would have to raise their fees, or their taxes, higher than maybe we needed to do it.”

Scott said the state will be able to pay off its debt to the federal government ”over the next five years.” He said taking more time was preferable to imposing more “fees” on businesses in Florida.

“If we want employers to hire more people, we have to go to think as they do,” he said. “They got to keep their costs as low as they can. If we can pay this over a longer period of time, it should put [Florida businesses] in a better position to compete.”

Florida House Speaker Dean Cannon said during the same press conference that unemployment insurance is a “federal mandate of a sort [that] imposes these obligations on states.”

Cannon also said the federal government “ties our hands-on how we go about resolving” the obligations.

Video of today’s event, captured by the News Service of Florida:

PPolitics
The GEO Group Inc., a Boca Raton-based private prison firm, has scrapped its state-level political action committee after an audit by the Florida Department of State found it was taking in contributions that exceeded state limits.
PPolitics
Later today, President Barack Obama will give a speech at George Washington University outlining his long-term deficit-reduction plan. He is expected to look specifically at defense spending and the tax code, according to Roll Call.