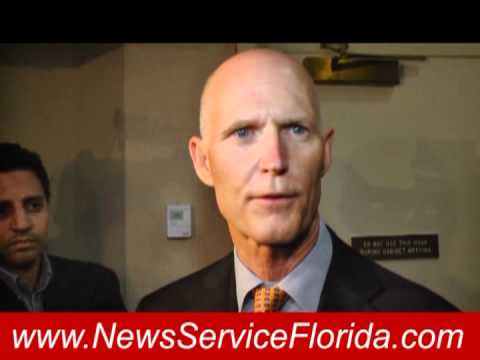 After The Florida Independent broke news on Monday that Gov. Rick Scott vetoed $1.5 million for Florida rape crisis centers during Sexual Assault Awareness Month, the governor began discussing the elimination today — and he is fumbling his words.
20
Shares
20
0
0
0

After The Florida Independent broke news on Monday that Gov. Rick Scott vetoed $1.5 million for Florida rape crisis centers during Sexual Assault Awareness Month, the governor began discussing the elimination today — and he is fumbling his words.

The governor’s office has said that the money allotted to Florida Council Against Sexual Violence was “duplicative” and that “nobody was able to make it clear to [the governor] why rape crisis centers needed the new funding.”

Advocates in the state and officials at the Council are crying foul.

Jennifer Dritt, the executive director of the Council Against Sexual Violence, told me the funding was “thoroughly vetted” in the Legislature and had “met the criteria” set forth by the governor for member projects. She also said she sent an email to the governor’s office explaining the need for the program.

In Tampa, an advocate has invited Scott to a rape crisis center in an effort to educate him on the need for funding.

During a press availability at the Capitol today, after Scott attended an event honoring crime victims at a ceremony marking Crime Victims Rights Week, the governor was asked about the elimination of the money.

His answer: ”Well, as you know, that money was dupped… dup…” Scott stuttered. “It was in addition to what we’re already doing.”

“We have increased funding for domestic violence, we have money that goes into the rape crisis centers already,” he told reporters. “So, it was additional money that we already funded.”

You can watch Scott’s explanation today below via the News Service of Florida:

OOldPolitics
Pamela Geller, a radical anti-Islam blogger based in New York and one of Rifqa Bary's attorneys settled in defamation lawsuit brought by Bary's parents attorney this week.
OOldPolitics
GOP presidential candidate Newt Gingrich's recent call for a humane path to immigration enforcement makes him the most recent conservative voice calling for solutions that encompass something more than the mass deportation of undocumented immigrants.