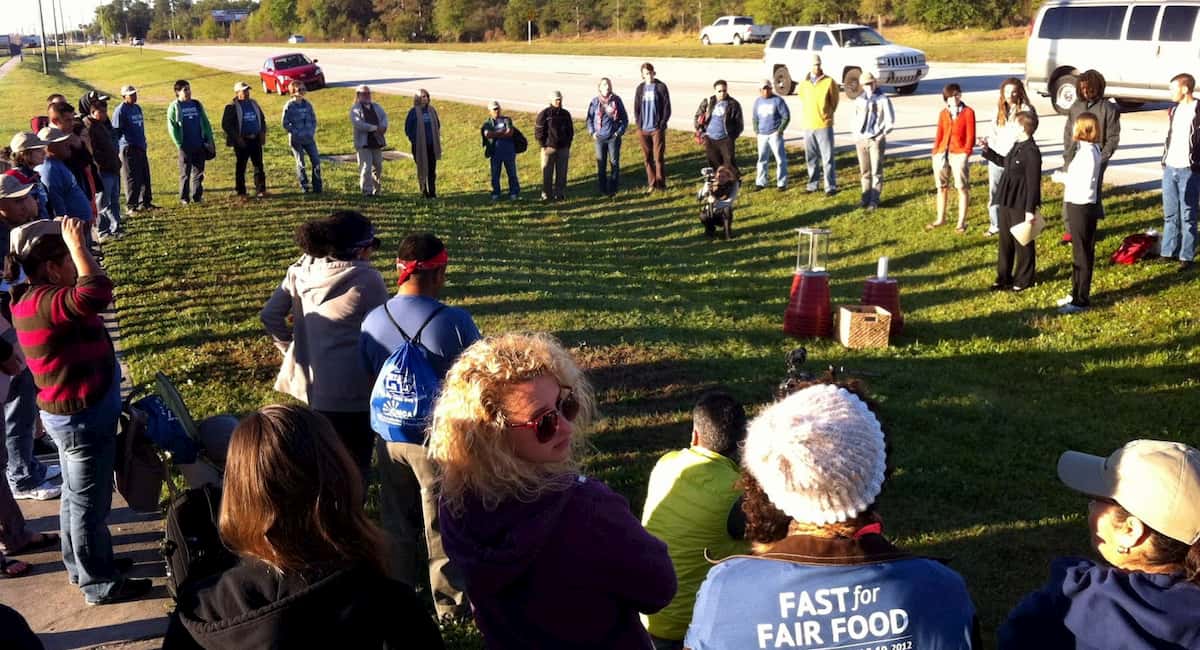 The University of Florida Student Senate approved legislation last week calling on Publix to meet with the Coalition of Immokalee Workers in an attempt to pressure the state’s largest supermarket chain to adhere to the labor demands many other national grocers and fast food chains have agreed to in recent years.
0
Shares
0
0
0
0

The University of Florida Student Senate approved legislation last week calling on Publix to meet with the Coalition of Immokalee Workers in an attempt to pressure the state’s largest supermarket chain to adhere to the labor demands many other national grocers and fast food chains have agreed to in recent years.

The resolution addresses a number of issues, including cases of modern day slavery in Florida’s fields, and notes UF Student Senate support for a previous successful Immokalee Workers campaign against campus food provider Aramark and the fact that students make up nearly half of the population of Gainesville, which currently boasts 12 Publix locations.

As reported by the Alligator:

“Justice is not 50 cents for a 32-pound bucket of tomatoes,” said Senator Cassia Laham, who helped draft the resolution.

Oscar Otzoy, a member of the coalition, shared his personal experiences with the working conditions of the immigrant farm workers. His testimony was translated by Mark Rodriguez.

“Our basic rights are not respected,” Otzoy said. “We receive wages which are below the poverty level. All we want is for Publix to do the same thing that other companies have done.”

In November, the Immokalee Workers celebrated a victory against The Florida Tomato Growers Exchange, a trade group representing 90 percent of tomato producers in the state. The group has led successful campaigns in recent years against Taco Bell, McDonald’s, Subway and Aramark, who all agreed to a penny-per-pound wage raise — amounting to a nearly 50 percent increase in earnings per bucket of tomatoes picked for the average farmworker.

Publix currently operates 735 stores in Florida, and in 2006 was ranked the 15th largest retailer in the U.S. The company has thus far refused to meet with the Immokalee Workers, who received the State Department’s 2010 Hero Acting to End Modern-day Slavery Award. The group is set to launch its “Do the Right Thing” campaign later this month, drawing its motto from a business philosophy espoused by Publix CEO William “Ed” Crenshaw:

Obviously, my hero in the business world has been and will always be George Jenkins, “Mr. George,” the founder of Publix and my grandfather. He was a genius with the unique ability to combine a keen business sense with his love and appreciation for people. He started Publix to make a living, but his drive for success was the result of his competitive spirit and his desire to help others. I doubt it was ever to grow his personal wealth, which is why our company is associate owned today. Much of his joy was seeing others succeed and grow.  George Jenkins set a wonderful example for me and taught me many valuable lessons, but the one that stands out, and the one I think about most often is very simply, “don’t let making a profit stand in the way of doing the right thing.”

Publix has also taken criticism in recent weeks following a company spokesman’s comments in December on the issue of harsh labor standards in Florida’s tomato fields.

Via a recent Palm Beach Post letter to the editor:

In South Florida, deemed “ground zero for modern slavery” by a chief assistant U.S. attorney who has prosecuted multiple servitude operations, we need look no further than our local supermarket to find indifference to the plight of Floridians held against their will. Publix, a major buyer of Sunshine State produce, recently made known its lack of concern for abuse in its supply chain. When asked by The Bulletin in Alabama last month about exploitation on the farms where it buys its produce, Publix spokesman Dwaine Stevens responded: “If there are some atrocities going on, it’s not our business. Maybe it’s something the government should get involved with.”

The UF resolution ends with the following:

The University of Florida Student Senate urges Publix to meet with the CIW and agree to improve the wages and working conditions of the Florida tomato pickers in its supply chain by agreeing to pay at least one penny more per pound for its tomatoes – to be passed directly to the workers – and, together with the CIW, implement an enforceable, human rights-based Code of Conduct for its supply chain.

Read the resolution in full:

PPolitics
Despite the fact that a Senate budget draft distributed on Wednesday includes no money for either Everglades restoration or the Florida Forever program, Senate budget chief J.D. Alexander says he is seriously considering matching the House’s line item for Everglades restoration.
PPolitics
GOP presidential candidate and Texas Gov. Rick Perry may join Focus on the Family’s James Dobson and other conservative figures during a two-day “Pastor Policy Briefing,” in Orlando, Fla., an October event being organized by David Lane, who also directed fundraising for Perry’s August prayer rally, “The Response.”