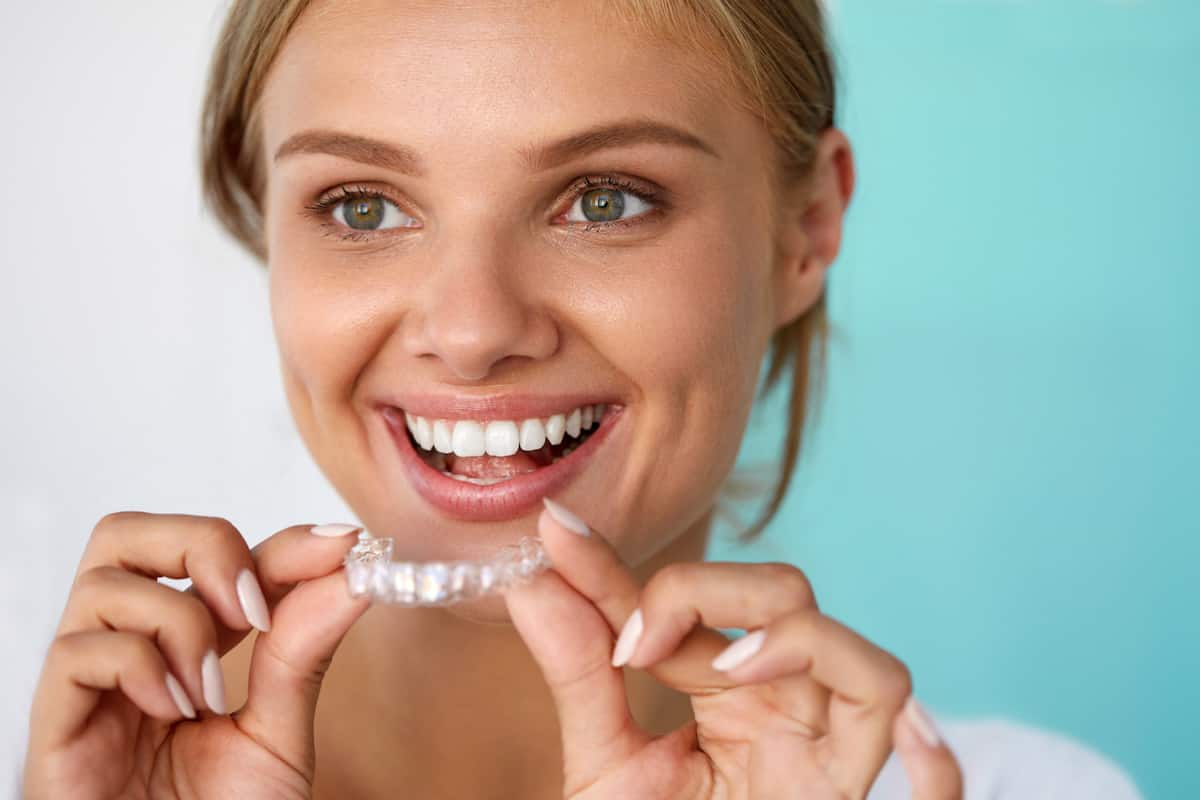 Traditional Braces vs. Invisalign: Which is Right for You?

Do you wish you felt more confident about your smile?

If so, you’re not alone. One-third of Americans aren’t happy with their smile. Luckily, you don’t have to live the rest of your life smiling with your mouth closed for pictures or covering your mouth when you laugh!

There are two main ways you can fix your teeth: with Invisalign or with traditional braces. Both of these methods come with their pros and cons.

Check out this guide to learn about Invisalign vs. traditional braces.

What are Traditional Braces? 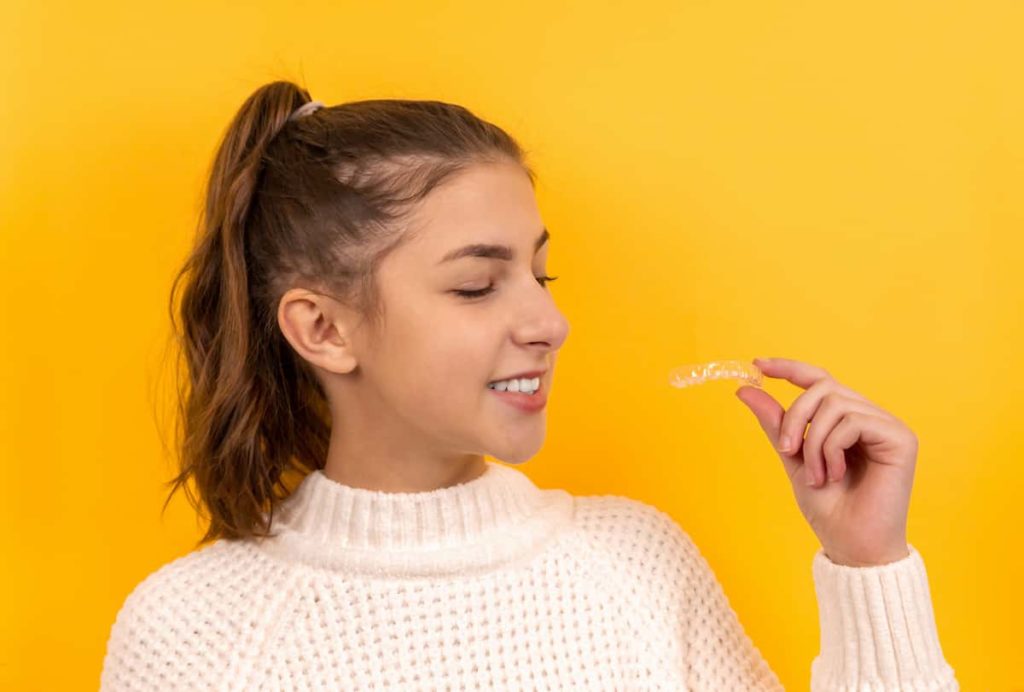 Traditional braces are metal brackets that are screwed onto the front surface of your teeth. An orthodontist carefully threads a wire through each bracket to connect the braces. He/She will also tighten the braces at various points throughout your treatment.

Once your orthodontist puts the brackets in place, your teeth can shift together in a safe and effective manner.

The Benefits of Traditional Braces

Even though traditional braces have been around for centuries, they keep getting more and more advanced. Every year, they help millions of people achieve a healthier smile.

Here are some of the biggest benefits of traditional braces:

This isn’t always the case for Invisalign, as Invisalign can’t always fix severe crowding or impacted teeth. If you have serious issues with your teeth, traditional braces may be the better route. 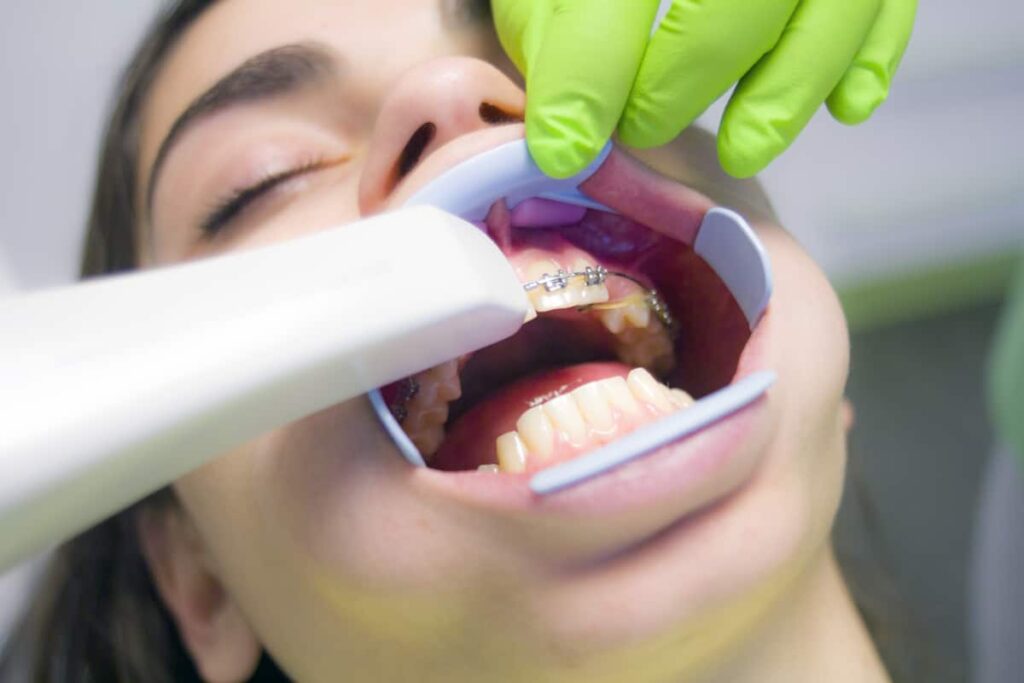 Whether you’re eating, sleeping, or working, traditional braces are always working to align your teeth.

They’re in your mouth 24/7 from the day you get them in until the day you have them taken out. This means you never have to worry about there being a period in which your teeth aren’t getting straighter.

It can be all too easy to take them out for your meal and then forget to put them back in again. If you’re forgetful or struggle with routine, you may find that traditional braces are the better option.

Generally speaking, traditional braces are more affordable than Invisalign trays. Traditional braces cost anywhere from $1500 to $4000. How much you pay for your braces will depend on your insurance coverage, the severity of misalignment, and the clinic you go to.

Before you decide which route to take, look into your insurance coverage.

The Downsides to Traditional Braces 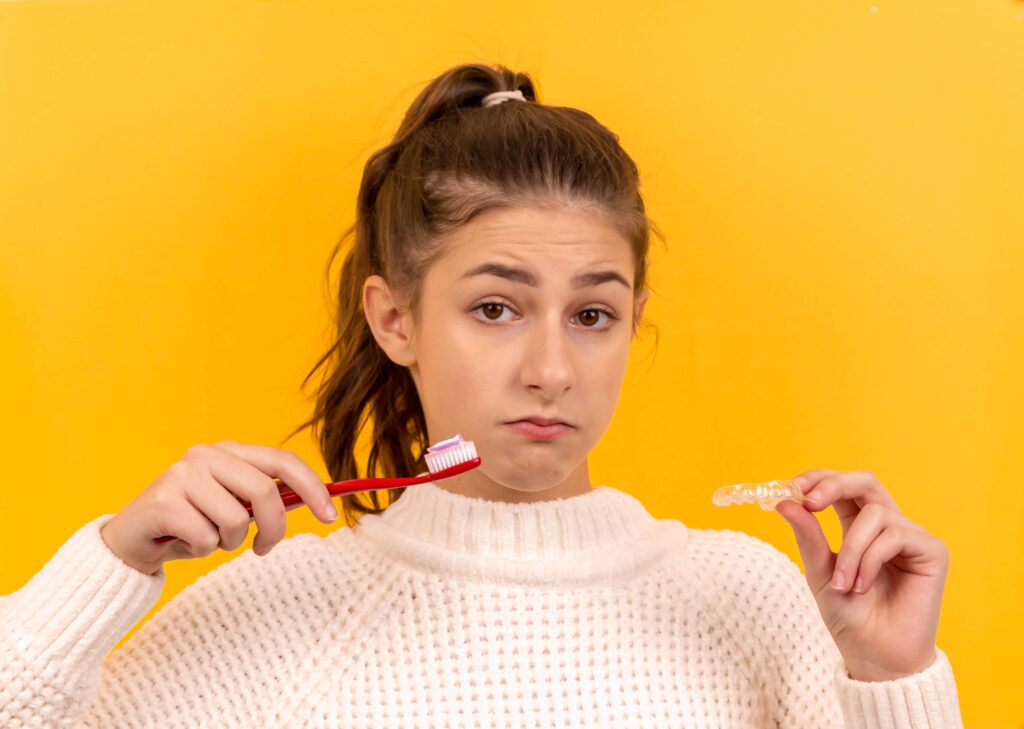 Of course, there are downsides to getting traditional braces. These include:

Perhaps the biggest downside is that traditional braces are completely visible. While wearing braces is nothing to be embarrassed about, some people prefer the discreetness of Invisalign.

People find traditional braces to be slightly more uncomfortable than Invisalign. Wires and brackets can rub on your gums and on the inside of your mouth, causing pain and discomfort.

Plus, having your braces tightened can be a mildly uncomfortable experience.

When you have traditional braces, you can’t eat whatever you want. You need to avoid sticky and hard foods. You also need to avoid biting into hard apples, chewing gum, and popcorn.

Invisalign first came to the market in 1999. Since then, they’ve revolutionized the orthodontic industry, as they’re clear trays that allow you to discreetly straighten your teeth.

Chances are, you’ve come across someone with Invisalign trays in and didn’t even notice.

The Benefits of Invisalign

There are a lot of reasons people choose Invisalign over traditional braces. Here are the top benefits:

As we mentioned, the trays are completely clear. They won’t alter your appearance whatsoever. You won’t feel the need to remove your trays when taking pictures, going on a date, or going out in public. The only time you need to remove them is when eating. 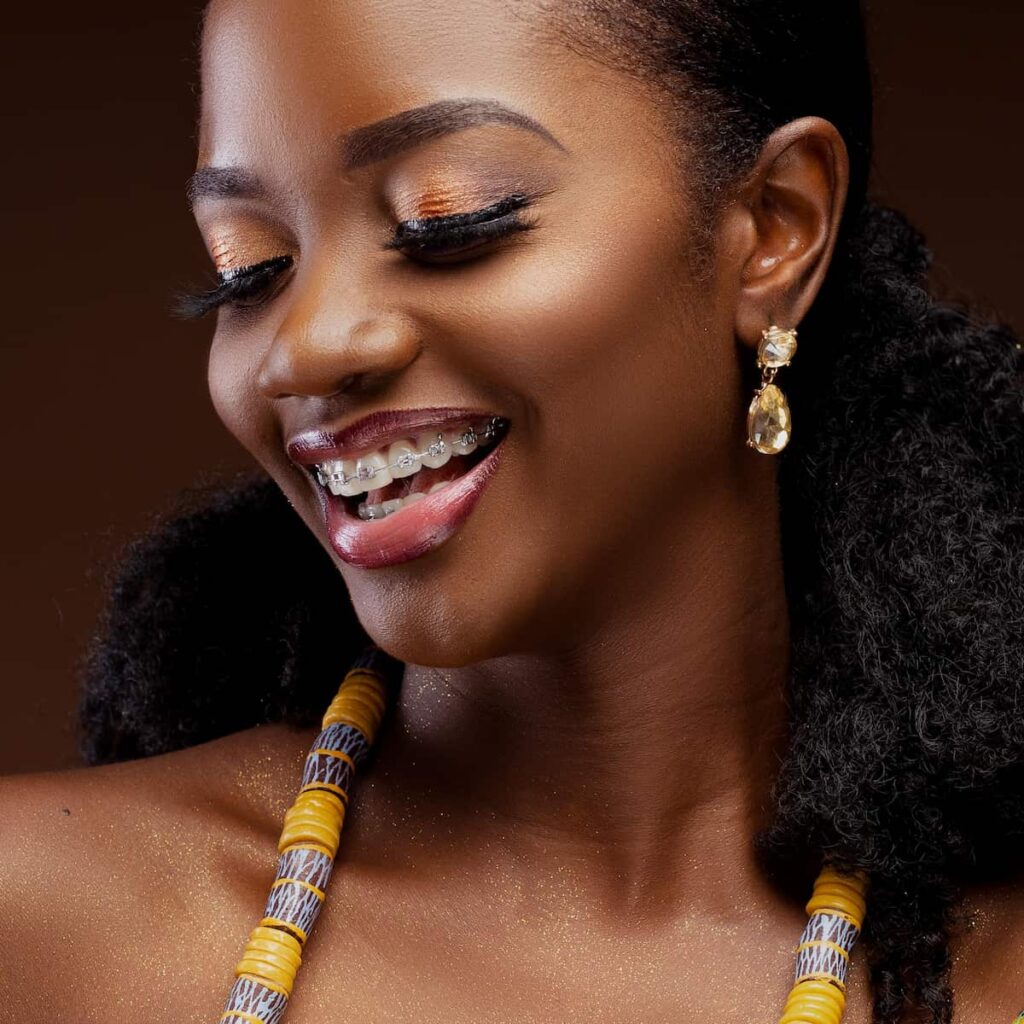 A lot of people find Invisalign trays to be way more comfortable than traditional braces, as they don’t come with any wires or metal brackets. Your orthodontist molds the aligners to fit snugly around your teeth, so you don’t have to worry about any pain or mouth sores.

Because you take your Invisalign trays out when you eat, you don’t have to cut any foods out of your diet. That being said, you should still clean your teeth after you eat, as you don’t want a sticky piece of food to get stuck on your trays.

The Downsides to Invisalign

Before you hop on the Invisalign train, there are a few downsides you need to consider. Here are some of the biggest drawbacks:

As we mentioned earlier, traditional braces tend to be a lot more affordable than Invisalign. If your insurance doesn’t offer Invisalign coverage, this teeth straightening method may be entirely out of the question.

Many people find it a hassle to take the trays out every time you eat, clean them, and then put them back in again after eating. As we mentioned, if you don’t leave the trays in for 22 hours per day, your teeth won’t straighten as quickly.

If you don’t want to deal with cleaning, maintaining, and keeping track of your Invisalign trays, braces may be a better option.

In many cases, Invisalign trays can be just as effective as traditional braces. However, if your teeth are severely misaligned, you may not be a candidate for Invisalign trays. You can speak to an Invisalign provider to figure out if you’re a good candidate.

Traditional Braces vs. Invisalign: Which is Right for You?

Now that you know the differences between traditional braces and Invisalign, it’s time for you to decide which teeth straightening method is right for you. We suggest speaking with your orthodontist to help you make the decision.

And be sure to check back in with our blog for more oral care news and tips.

What You Need To Know About Enterprise Software Development 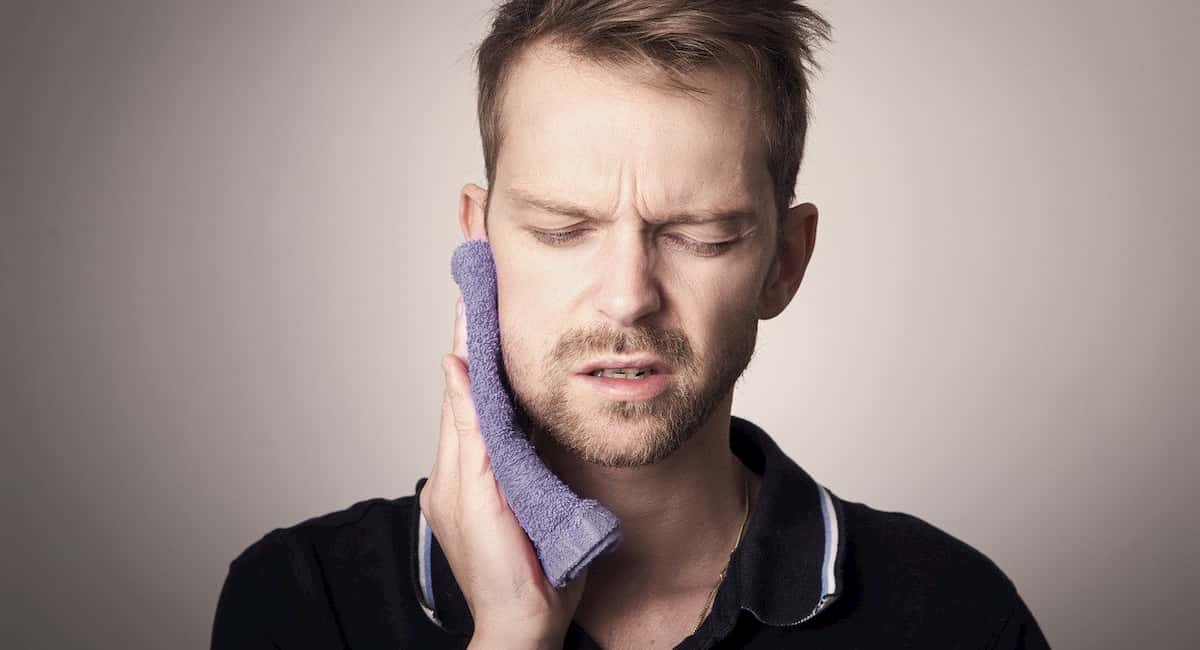