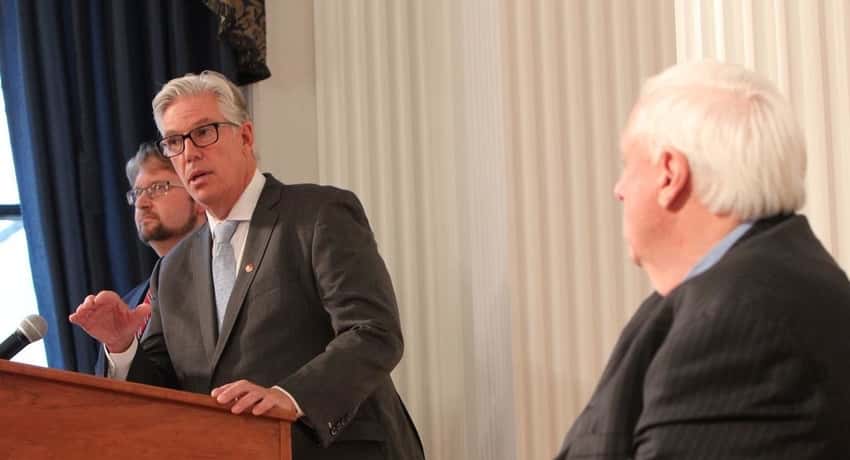 Romney, introduced as “hopefully” the next president, raises money for State Sen. Thrasher

The invitation-only event — which was attended by several area notables, including Jacksonville Sheriff John Rutherford and ex-Jacksonville Jaguar Tony Boselli — was held at the city’s downtown stadium. In addition to plenty of hobnobbing and political schmoozing, attendees were treated to speeches by both Thrasher and Romney that often felt more like a campaign fundraiser for Romney’s potential 2012 presidential bid.

Jacksonville Mayor John Peyton introduced Romney as “hopefully the next president of the United States,” and Romney himself said that he felt like his colleagues were “starting a campaign [for him] when” he “hadn’t even thought about it yet.”

While making his way to the podium, Thrasher told reporters that electing a candidate without experience was akin to putting a “rookie quarterback in a big game.” While speaking to the 250-person lunchtime crowd, Thrasher mostly spoke of the importance of elections and his hope that voters will “take back America with principled leadership,” but did briefly touch on an issue that is sure to become a divisive one in his Senate campaign: education reform.

“We need a world-class education system that we can be proud of,” Thrasher remarked. Romney delved deeper into the issue, citing former Florida Gov. Jeb Bush’s education overhaul as a prime template for reform: “[Jeb] brought Florida’s schools up from the basement. … California took a different course and it did not serve them well. They were once at the top, and now their schools are among the lowest-ranked. [Elected Democrats] would only create weaker and weaker schools.”

Though Thrasher’s opponent, dermatologist Charles Perniciaro, is lagging financially, he has a considerable advantage with the backing of the Florida Education Assocation. After Thrasher cast his support of Senate Bill 6 (which would have based state teacher evaluations solely on student performance) many lashed out at him, arguing the bill would place students with less-experienced teachers. Gov. Crist, who initially supported the bill, vetoed it after extensive lobbying from Florida teachers.

OOldPolitics
The Ryland Group, one of the nation’s largest homebuilders, will pay a civil penalty of $625,000 to resolve alleged Clean Water Act violations at its various construction sites across the country. Florida is one of 14 states to be affected by the violations.
OOldPolitics
Florida House Speaker Dean Cannon and Senate President Mike Haridopolos yesterday asked the U.S. Department of Justice to approve the two anti-gerrymandering amendments supported by Florida voters in last November's election, appending a lengthy explanation of how they feel the so-called Fair Districts amendments should be interpreted.