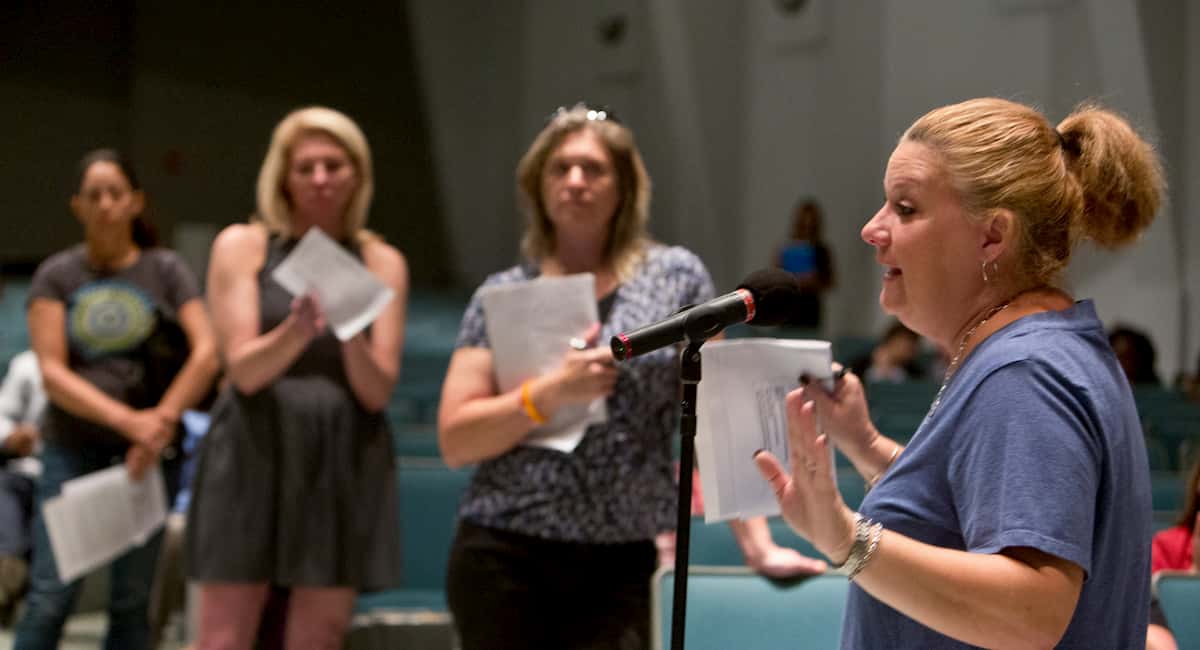 Teachers, parents meet in Miami to discuss opting out of standardized testing

Ceresta Smith, an educator with Miami-Dade County Public Schools and the University of Miami, spoke Saturday about opting out of K-12 standardized testing to a group of parents from the predominantly African-American neighborhood of Liberty City as part of National Opt Out Day.
0
Shares
0
0
0
0

Ceresta Smith, an educator with Miami-Dade County Public Schools and the University of Miami, spoke Saturday about opting out of K-12 standardized testing to a group of parents from the predominantly African-American neighborhood of Liberty City as part of National Opt Out Day.

Smith, a member of United Opt Out National, told the group of parents that what started as a three-day testing cycle has morphed into five cycles of standardized testing throughout the school year. She added that “Florida state statutes allow opting out of standardized or high stakes testing, and that school officials must provide concordant scores” for the Florida Comprehensive Assessment Test, known as the FCAT.

Smith told The Florida Independent that National Opt Out Day is “about spreading information.”

“Opting out means taking a stance and making a statement in which you refuse to continue to engage in high stakes testing,” she said. It also means to stop “supporting polices and legislation that support the over-emphasis on high stakes testing. You can opt out by refusing to have your children submit the test.”

“I’ve done this myself,” Smith said. “My daughter is a junior in Dade County public schools. In 10th grade, FCAT is mandatory for reading and math. I had her opt out of the testing FCAT; I also requested they remove all evidence of FCAT testing from prior years out of her records. She will have to either used concordant scores from ACT or SAT to graduate. As it stands now, they can use ACT or SAT testing to qualify her to graduate from Florida public schools.”

Smith explained that third-grade students who need a certain FCAT score to be promoted can be adversely affected by opting out, “however, according to the statute, they can use a portfolio assessment in lieu of FCAT test scores.” According to Smith, “every other grade level in which they test FCAT is not in the accountability zone and will not affect promotion at all.”

Smith said during Saturday’s teach-in that high stakes testing “is a tool to privatize public education” and “to support people who profit off public taxpayer money.”

She added that some of the damaging effects of standardized testing are “teaching to a test and forgetting rich curricula that is varied and helps foster critical and creative thinking.”

Standardized testing is part of the school reform agenda that has been imposed through federal education programs like No Child Left Behind, passed by George W. Bush in 2002, and Race to the Top, implemented by the Obama administration in 2009.

The Huffington Post reported that “a group of Democrats who support the market and data-based movement that’s become known as ‘education reform’ have increasingly advocated using tests as a significant component of teacher evaluations. That idea has become a centerpiece of the Obama administration’s education agenda, and a factor in the rewrite of NCLB.”

PPolitics
Eighteen Catholic colleges from around the country, including Ave Maria University in Florida, have asked the Obama administration to repeal a recent decision to include birth control in a list of preventive health care services.
PPolitics
Visit Florida, the group charged with promoting tourism in the state has gotten national and international attention for…