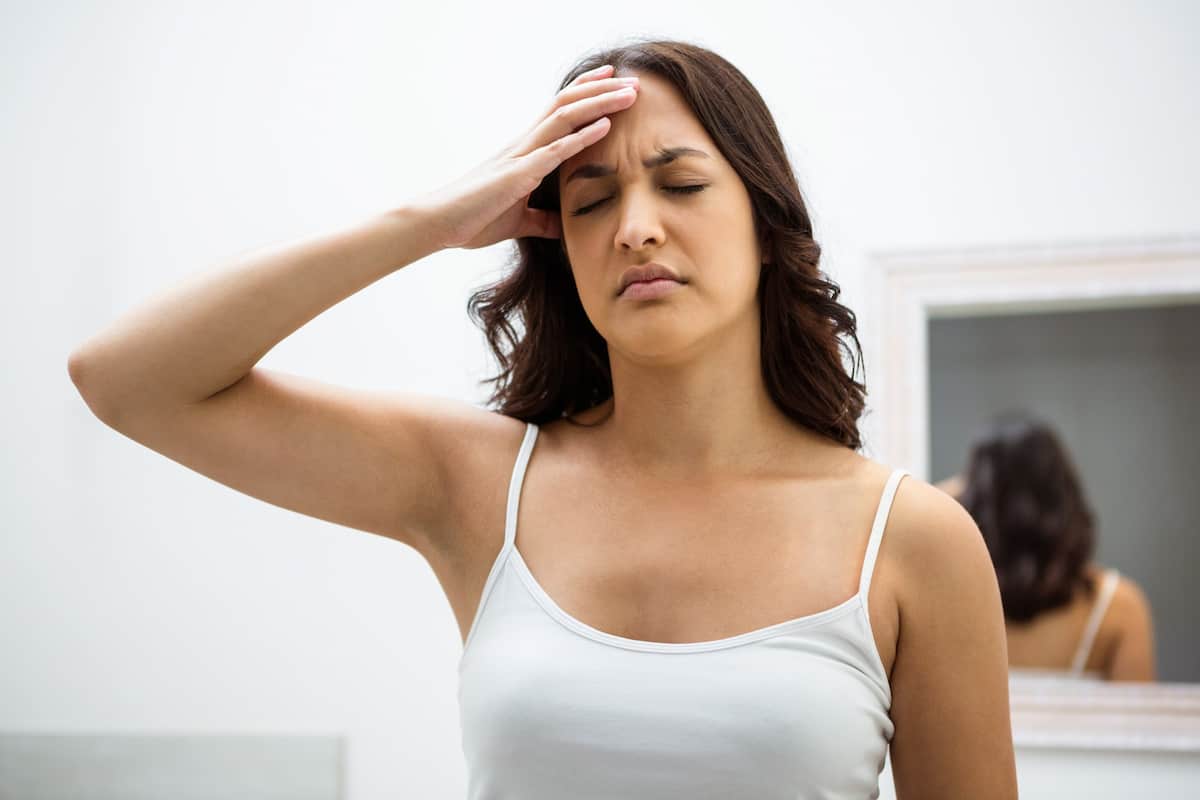 Synthetic Marijuana Side Effects and Safety: 8 Things You Should Know

Synthetic marijuana is also known as fake weed or synthetic cannabinoids. It has been used by many people as an alternative to marijuana. The products have been around since the early 2000s.

It should be noted that these synthetic substances were made in labs to help scientists understand the endocannabinoid system (ECS) in the human brain. However, they are usually marketed as “natural” and plant-based.

By understanding the side effects of synthetic marijuana, you’ll be able to better protect yourself and the people around you. Are you interested in learning more? If you are, then keep on reading and we’ll take you through everything that you’re going to want to know! 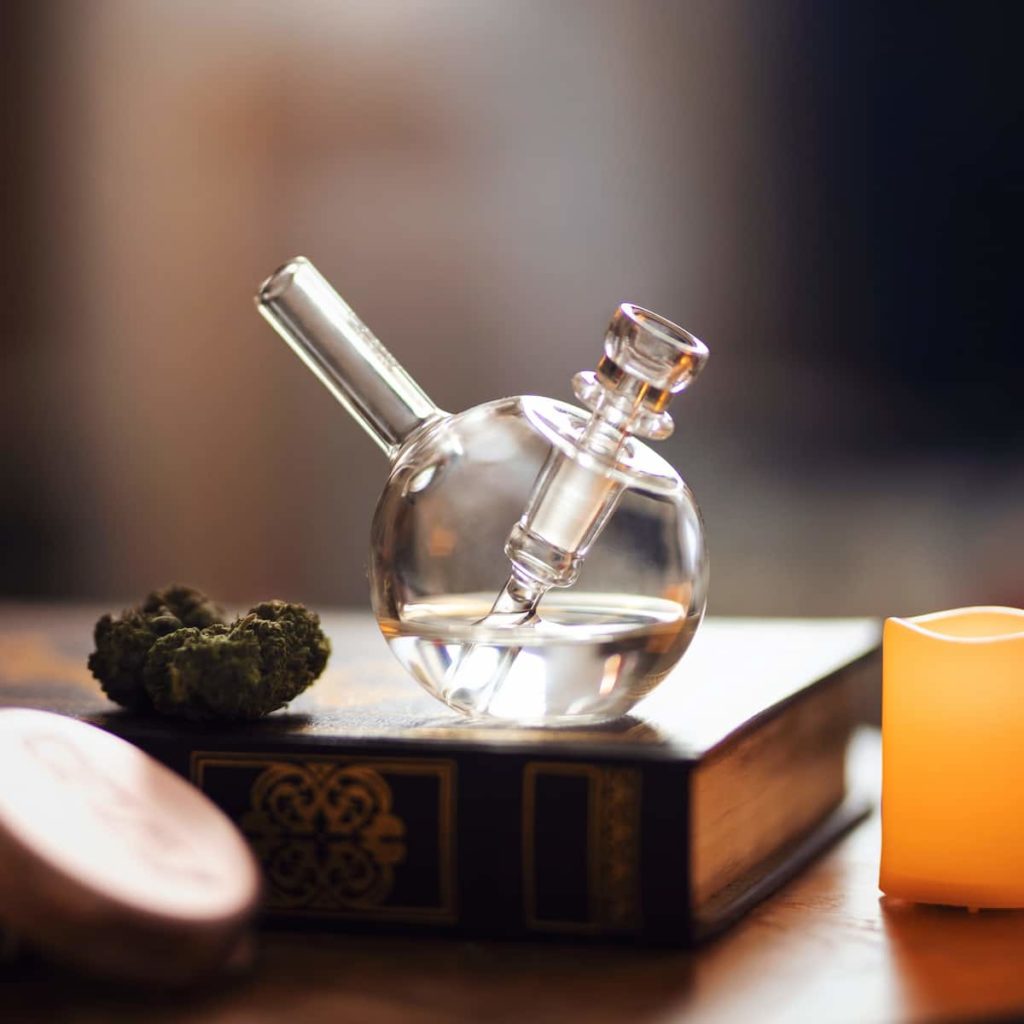 There are a bunch of synthetic marijuana products that are being sold under various marketing terms. Those terms include:

These convoluted marketing terms can make it difficult for parents and other grown-ups to know when they’re dealing with synthetic marijuana. Some of the brand names that you should watch out for include:

By knowing what names synthetic marijuana typically goes by, you’ll be more adept at recognizing the drug and protecting your children.

Fake weed products are classified as new psychoactive substances (NPS). These are unregulated substances that can intoxicate the user and produce the same effects as illegal drugs.

2. Know How to Recognize Synthetic Marijuana 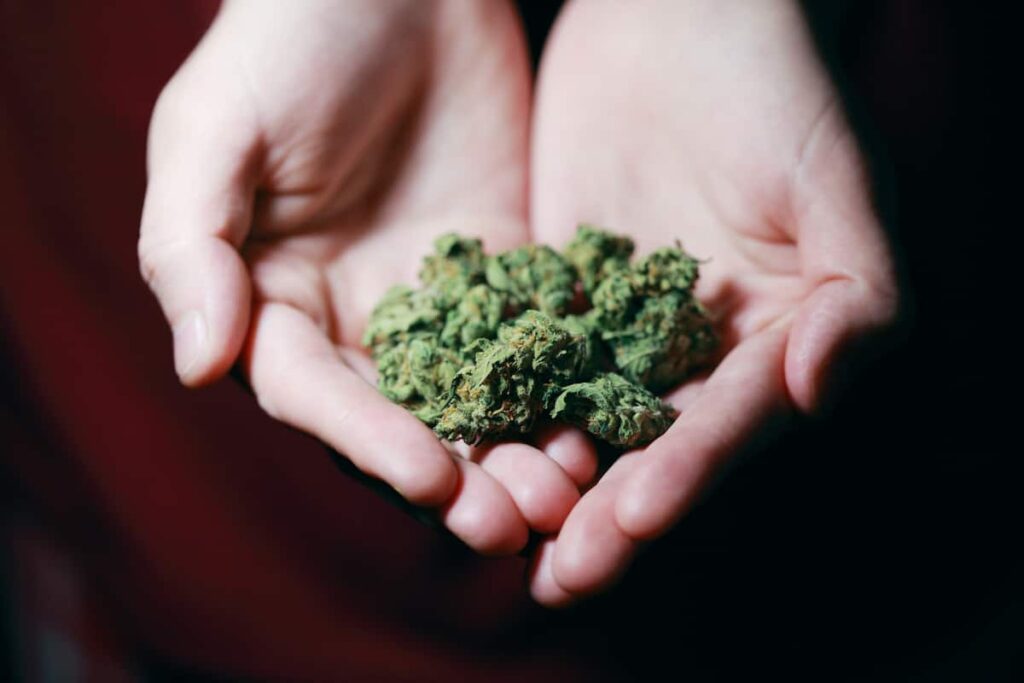 A synthetic marijuana product is usually going to contain a mixture of dried leaves from various herbal plants. These leaves come in all kinds of colors, including red, yellow, brown, and green. They are usually sold in little packets, usually three inches by two inches.

The packets tend to be colorful plastic zip baggies or foil packages. Some online vendors of legal synthetic marijuana will include disclaimers like “not intended for human consumption.”

3. Know What Synthetic Marijuana Does

Synthetic marijuana works on the same brain cell receptors as THC (tetrahydrocannabinol). THC is the intoxicating chemical compound in marijuana that is responsible for the notorious “marijuana high.”

THC is one of hundreds of cannabinoids in marijuana and interacts directly with the endocannabinoid system. This system is responsible for regulating a person’s hunger, mood, and sleepiness.

Synthetic marijuana is usually vaporized, brewed as a tea, or smoked. Many of these products are sold legally as “potpourri” or “herbal incense.”

Some people who use synthetic marijuana claim that it gives them a similar high to that of actual marijuana, however, it usually doesn’t last as long. Other users will say that they noticed a relaxed feeling, instead of the “head high” that actual marijuana is known to produce.

There are no standards for selling, packaging, or producing synthetic marijuana. This makes it practically impossible to know the amount and type of chemicals that are in each product. You also can’t ever know for sure what synthetic marijuana is going to do to your body or mind. 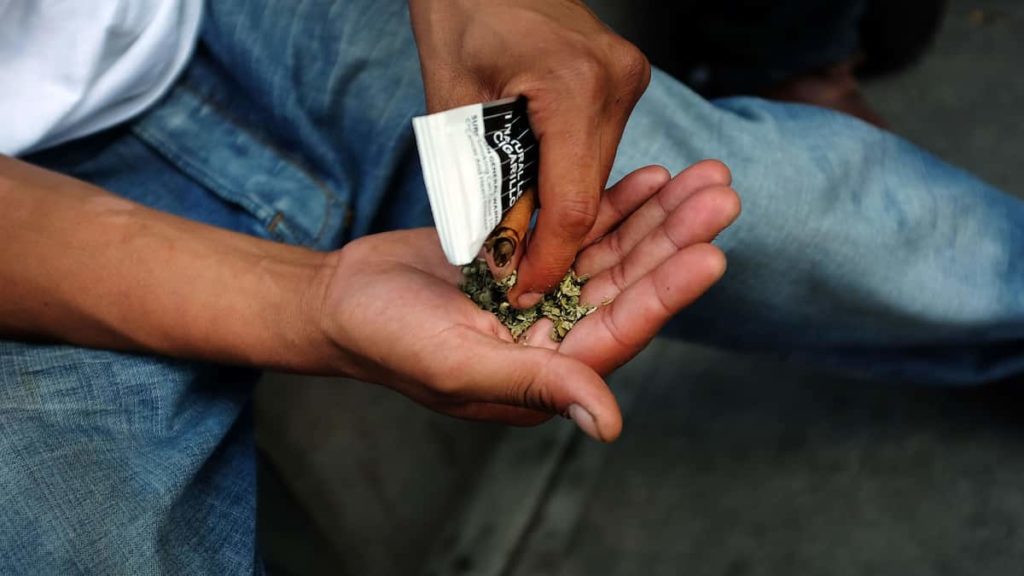 While more and more research is being conducted, the side effects that synthetic cannabinoid products have on the human body are still mostly unknown. Very few studies have been published about the effects of the chemicals on users. We do know that overdoses have led to deadly heart attacks.

Acute kidney injury that leads to dialysis and hospitalization can occur after consuming synthetic marijuana.

Taking synthetic marijuana and then driving can also be incredibly dangerous. People who smoke synthetic weed instead of actual marijuana are more likely to be incoherent, disoriented, and confused.

A side effect that usually isn’t associated with traditional marijuana is slurred speech. This side effect is common among users of fake weed.

Other than the short-term effects that we’ve pointed out, synthetic marijuana users might also experience anxiety, tremors, and seizures. They will also likely experience an increase in blood pressure.

Because of how new synthetic marijuana is, we don’t know if these observed symptoms are going to have lasting effects. Especially when it comes to young adult and adolescent users. With that said, it is known that smoking any substance is going to have negative effects on the lungs.

There have been some reports of synthetic cannabinoid products being laced with rat poison. This led to uncontrolled bleeding in many users and even killed several people who consumed the tainted substances.

There is one synthetic marijuana compound called JWH-018. JWH-018 is also known as 1-Pentyl-3-(1-naphthyl) indole. It is a Schedule 1 controlled substance and illegal to possess.

5. Listen to What the Experts Say

All of these substances contain all kinds of synthetic cannabinoids, which are chemicals that are made in labs.

Originally, synthetic weed products contained a chemical known as HU-210. This has a molecular structure that is very similar to THC.

However, HU-210 is now listed as a Schedule I controlled substance In the United States by the Drug Enforce Agency (DEA). So now any products that contain this substance are produced and sold in Europe.

These days, there are new synthetic cannabinoid compounds that have been manufactured. In fact, there are too many to list. Some of these chemicals have similar structures to THC while other chemicals aren’t structurally similar.

Some of these compounds are also considered to be controlled substances. By using different mixtures for synthetic marijuana, producers able to continue to legally sell their products in the United States when another formula becomes illegal.

Most of these chemical compounds are created in Asia where they don’t have any real standards or regulations for these products. They are then smuggled into the United States and sprinkled over “plant material.” They are then packaged and then sold in convenience stores, tobacco shops, and the like. 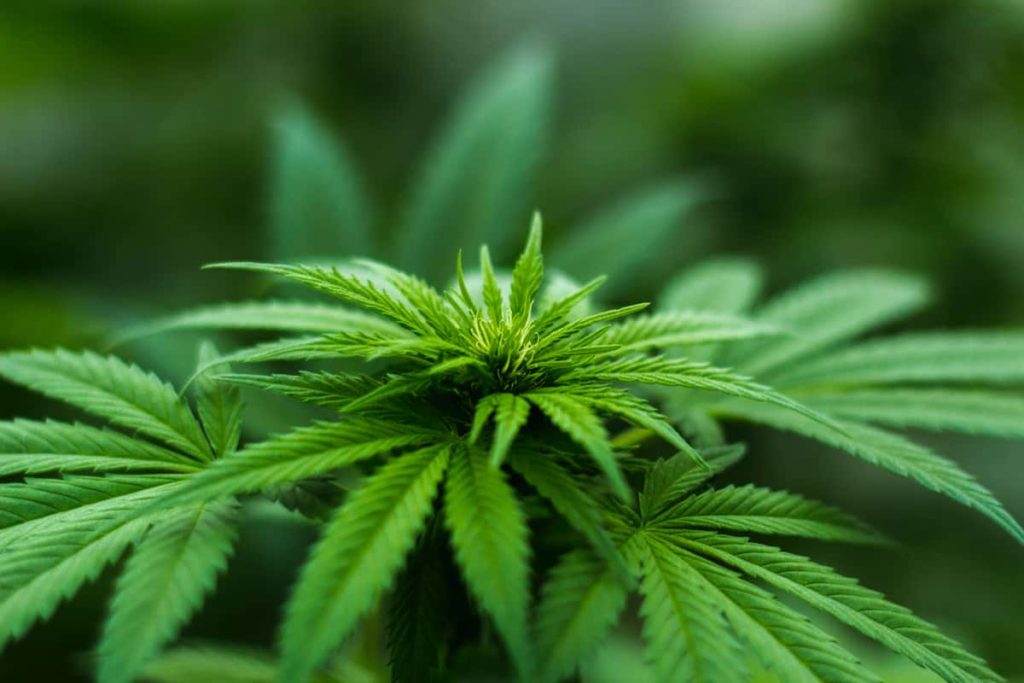 There are also around 100 more compounds that have been identified but aren’t currently controlled.

There are several varieties of synthetic weed that are listed as Schedule I controlled substances. This puts them in the same federal category as marijuana, crack cocaine, and lysergic acid diethylamide (LSD).

Many people are under the impression that it is safe to consume synthetic marijuana products because the chemicals are technically legal and they contain “natural” plant ingredients.

Of course, this has proven to be incorrect. There have been many instances of unexplained and severe bruising or bleeding and even some deaths. People are also more likely to visit the emergency room when they take synthetic marijuana because of a rapid heart rate, seizures, kidney damage, suicidal thoughts, violent behavior, and vomiting.

Some of the synthetic marijuana items that are commercially sold claim to have herbs that are usually used for medicinal purposes These herbs can include:

However, there are times when herbal ingredients like these are listed on the packages but aren’t actually in the products. Other than the synthetic cannabinoid HU-210, which is used to identify cannabinoid receptors in the brain by scientists and study the effects of THC, there aren’t any off-label or approved medical uses for fake weed.

6. Know the Signs of Use

If you’re the parent of a teen or young adult, then you should definitely be aware of the physical effects and behaviors that are caused by using synthetic weed. While exhibiting one or more of these signs might not mean that your child is doing drugs, they are strong indicators of drug use and should be taken seriously.

As a parent, it’s important that you be constantly on the lookout for these behaviors and physical effects.

One of the biggest misconceptions about synthetic weed is that it’s “natural marijuana.” This could not be further from the truth.

Synthetic weed is by no means natural marijuana. It is made from any of several hundred synthetic chemicals that were created in a lab. The chemicals are then sprayed onto some chopped-up plant matter.

Synthetic weed is also a lot more powerful and contains synthetic cannabinoids or TCH analogs that can be several hundred times more powerful than the THC found in marijuana. Often, toxic impurities, additives, and other kinds of drugs are also found to be in fake marijuana products.

Regularly consuming synthetic marijuana can lead to increased tolerance. The user will need more and more of the substance in order to experience the same effects.

If you use these drugs regularly, then you can also become psychologically and physically dependent. This means that if you stop immediately, you will likely experience withdrawal symptoms.

Because the chemical composition of synthetic marijuana is unknown, and it can change from one batch to another, withdrawal, dependence, and tolerance might also vary.

In addition to experiencing symptoms of withdrawal and building up a tolerance, other signs of addiction to fake weed can include:

If you feel that you’re addicted to synthetic marijuana, then it’s important that you seek the proper help.

The Importance of Knowing About Synthetic Marijuana

Are you looking for other helpful articles like this one? If so, check out the rest of our site today for more!

PPE Supplies: What You Need To Know

Why Proofreading Your Packaging is Important to Your Company 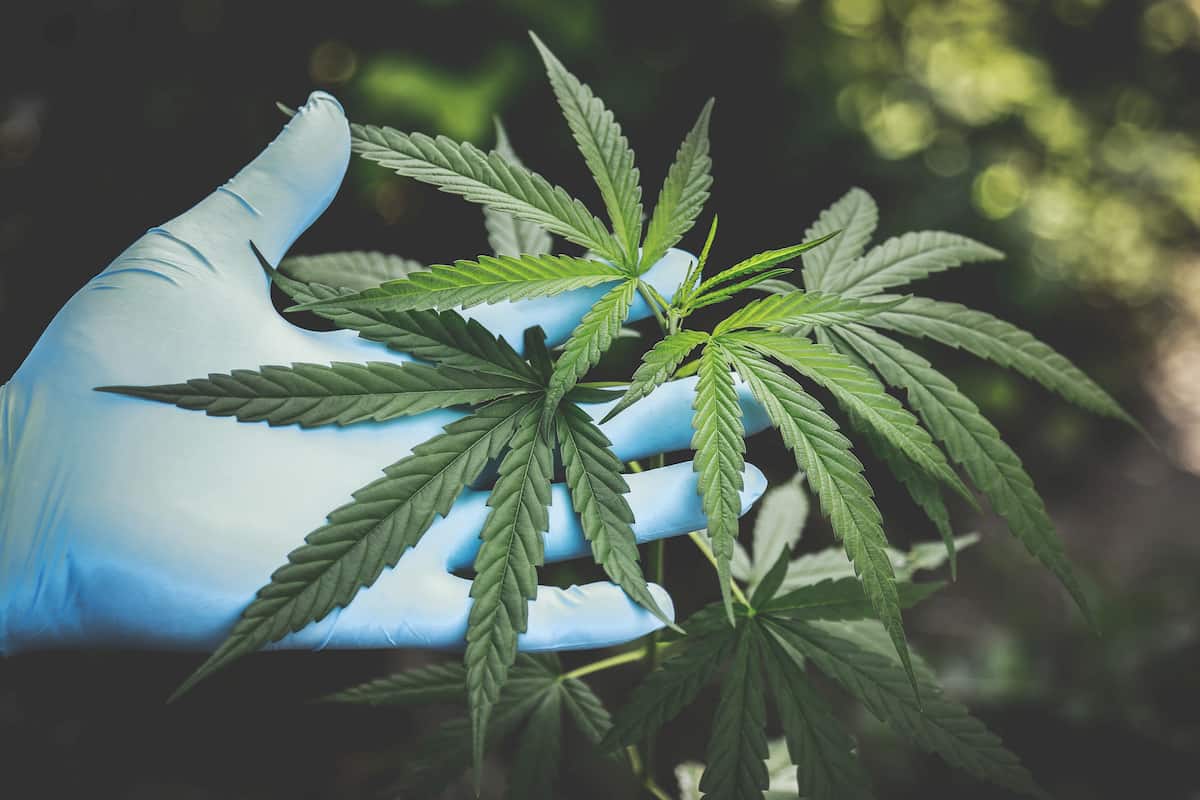 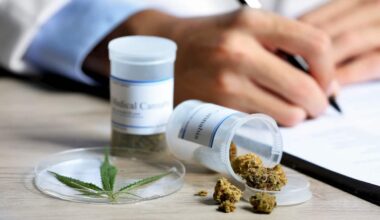