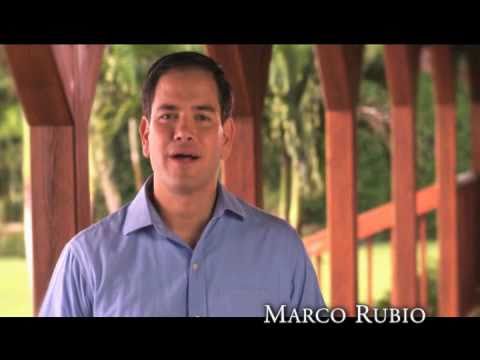 Marco Rubio released the first Spanish-language television ad in the race to represent Florida in the U.S. Senate on Sunday. The move is a natural one; after all, as the Miami Herald‘s Naked Politics points out, “the telegenic son of Cuban exiles is fluent in Spanish and can speak directly to the camera.”

And at a Sarasota rally held on Sept. 11, Rubio shared the stage with Rep. Vern Buchanan, R-Sarasota, who touted his sponsorship of a bill making English the country’s official language, generating boisterous applause from the crowd. (At least one audience member hoisted a homemade sign emblazoned with the slogan, “Yo Quiero Marco.” Translation: “I want Marco.”)

A call to Buchanan’s campaign office asking for Buchanan’s opinion of Spanish-language political advertising and a call to Rubio’s campaign yesterday were both not returned.

In a piece posted at the Yahoo! News blog The Upshot, Rachel Rose Hartman examines Rubio’s contradictory stance, and was able to wrangle this response out of the Rubio campaign:

Marco believes learning English is essential for success in the United States, and should be the official and unifying language of America. Unfortunately, in a shameless effort to score cheap political points, some have purposely twisted Marco’s position to suggest he believes other languages should be banned. This is an outrageous suggestion.

The campaign doesn’t cite a source for its claim that “some” are suggesting Rubio “believes other languages should be banned,” which really isn’t the issue. Rather, our question revolves around whether it is hypocritical for a candidate who believes English should be our nation’s official language to be conducting political speech in Spanish.

PPolitics
The environmental law firm Earthjustice today announced that it has filed a 60-day Notice of Intent to Sue the U.S. Forest Service to protect imperiled manatees and shortnose sturgeon, two species the firm alleges are blocked from migrating in the Ocklawaha River because of a dam operated by the Florida Department of Environmental Protection.
PPolitics
At a meeting for oil spill victims hosted by Sen. Bill Nelson at the University of West Florida, claims administrator Kenneth Feinberg sought to reassure people