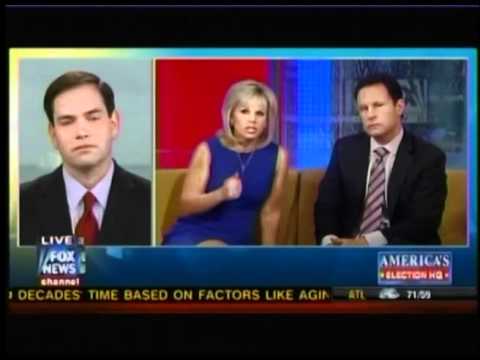 “We are the party of strong national defense, that understands the role of America in the world and how every aspect of our daily lives, especially our economic lives, are directly impacted by things that happen halfway around the world,” Rubio said.

He added that we need “to examine all of our foreign aid, and make sure it makes sense,” adding that the “foreign aid we put out is very small part of our overall budget.”

Rubio said he will not reconsider a vice presidential run. “I am focused on my  job as a senator from Florida [and] making sure Florida’s voice is heard,” he said.

When asked if conservatives should stop talking about immigration, Rubio responded, “Jobs and the economy is the No. 1 issue, we should be focused on that — it should be 90 percent of our focus right now in terms of domestic policy.” Rubio said Latinos have been hurt “very badly by the president’s economic policies and we need to make that case.”

On immigration Rubio, said legal and illegal immigration remains a problem that needs to be confronted. He added that the Republican Party “should be the pro-legal immigration party,” saying it’s time for GOP candidates to start talking about “what are we for” and about “how we modernize our legal immigration system.”

Florida congressman part of the 1 percent

OOldPolitics
A new report by the U.S. Geological Survey shows that growing corn for biofuel production  is having unintended effects on water quality and quantity in
OOldPolitics
Sixty anti-abortion rights billboards placed throughout Oakland in mid-June have created controversy and generated publicity for the groups that sponsored them. Now they're coming down.