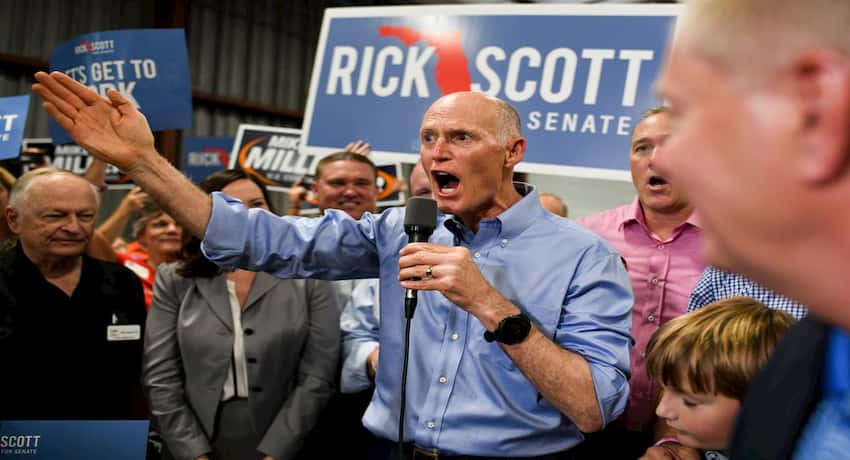 Unknown candidate Mike McAlister earned about 10 percent of the vote. McCollum was all but expected to win the nomination until Rick Scott entered the race, and some polls in recent days showed him with a slight lead.

Scott, who has never held elected office, only announced his candidacy in late April and spent almost $40 million, out of $218 million he has in disclosed assets. He ran on his business experience as former CEO of the for-profit hospital chain Columbia/HCA, despite the fact that he was forced out after the company paid $1.7 billion to the U.S. government for Medicare and Medicaid fraud. Last year, he founded the group Conservatives for Patients Rights to fight against the Obama health care plan.

Late in the election, The Florida Independent reported on new allegations against another health care chain he co-founded, Solantic, that included Medicare overbilling and using doctors licenses at clinics they did not operate at.

McCollum had been a former congressman from Orlando from 1981 to 2001; he won the race for attorney general in 2006. He had lost two nominations for U.S. Senate. McCollum had the endorsement of top Republicans like Rudy Giuliani, Mitt Romney, Mike Huckabee, and most Republican leaders across the state.

Race was among the most negative in the country. Buoyed by his self-funding, Scott ran ads attacking McCollum for being a career politician, and McCollum and associated groups ran ads attacking Scott for his tenure at Columbia/HCA. McCollum lost out on state matching funds over the spending cap of $24.9 million after a Federal Appeals Court in Atlanta declared an injunction against it after Scott’s lawyers filed suit against it.

Scott has a difficult task in uniting the party. He will have to persuade the vast majority of state Republicans who backed McCollum and to support him. The RPOF condemned Scott for linking McCollum to disgraced former party chairman Jim Greer, who faces criminal charges related to funneling party money into his own checking account.

OOldPolitics
In an interview this week with Andrew Restuccia, oil spill claims administrator Kenneth Feinberg sheds more light on…
OOldPolitics
Impact. It's a word we at The Florida Independent throw around daily behind the scenes, but it's not an idea we talk about much in public. Sure, it's featured prominently in our statement of purpose (to produce news that impacts public debate and advances the common good), but in the daily What Have You Published in the Last 10 Minutes? rush, it's easy to overlook. I'd like to change that.