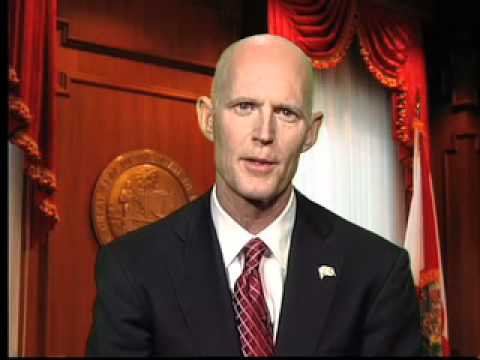 Many people in the tea party movement took a quick liking to Rick Scott, a political newcomer who embraced their ideals of less government and lower taxes. Scott courted the movement in return. Today in Eustis, Gov. Scott will present his budget to the tea party, first at a private luncheon for group leaders and then at a rally that organizers say is expected to draw dozens of groups from around the state.
1
Shares
1
0
0
0

Many people in the tea party movement took a quick liking to Rick Scott, a political newcomer who embraced their ideas of less government and lower taxes. Scott courted the movement in return: #

I think it’s great. I’ve attended several rallies in Florida and around the country, and had the privilege to address the crowd at many of them. Forget the attacks on the Tea Party that you’ve heard in the mainstream media – the people I’ve met are genuine, hard working folks who want the government to be accountable to the taxpayers again. And they’re patriots, too. They want what is best for our country and they’re willing to get out and make their voices heard, and I believe they are going to be a major factor in turning our state around, too. #

Today in Eustis, Gov. Scott will present his budget to the tea party, first at a private luncheon for group leaders and then at a rally that organizers say is expected to draw dozens of groups from around the state. #

Tea party leaders say they aren’t going into the event with any pre-drawn conclusions, and that they plan to take a close look at the governor’s proposal. Still, Central Florida organizer Tom Tillison says Scott’s decision to unveil his budget at a movement event is a signal that activists might like what they’re going to see. #

Lawmakers have voiced skepticism at some of those ideas, especially the tax cuts. The state already has to fill a budget gap of more than $3 billion, and some lawmakers are looking to set aside an additional $1 billion or more to shore up the state’s credit rating. Without new revenue, that could mean budget cuts in the range of $5 billion. #

Scott confirms that number in his weekly radio address, in which he warns of “deep cuts” and promises “one of the most fiscally responsible budgets in the nation.” #

As the debate over the budget begins, we’ll start to learn whether the tea party will the “major factor” Scott predicted during the campaign. Veteran, Tallahassee reporter Gary Fineout offers this analysis: #

On the one hand some lawmakers are amazed that Scott is willing to be the “bad guy” so to speak. In other words, he’s come out with with the really tough proposals that could likely make the Legislature appear somewhat benevolent in return. #

Scott, however, is trying for an interesting political gambit. Since he operated outside the traditional GOP infrastructure, he’s turning to the Tea Party groups to help act as his constituency for his recommendations. In recent weeks, he has warned about the “special interest groups” that will complain loudly about his proposals. #

This is in itself a tacit acknowledgement that the “interest group” that Scott has to battle could be the Republican-controlled Legislature. The unspoken truth here is that Scott doesn’t owe his victory to them, nor do legislative leaders owe any true support to him. #

Charlotte County organizer Robin Stublen says the eruption of opposition greeting members of Congress during town hall meetings over health care reform in recent years proves the tea party can have an impact beyond the ballot box. The movement has inspired thousands of conservatives to “get off the couch,” in tea party parlance, and demand more involvement in their government’s decisions. #

Stuben says that by presenting his budget to grassroots activists first, Scott is tapping into that impulse. #

“I really think it’s outstanding,” he says. “I honestly think the governor is including ordinary citizens in the process, which is a good thing.” #

PPolitics
In what appears to be a reward for loyalty, Bill Clinton will campaign for Rep. Kendrick Meek this August, reports The Buzz. Clinton has already headlined five
PPolitics
The National Black Prolife Coalition and The Radiance Foundation released their latest in a series of videos on Tuesday, this time claiming that Planned Parenthood and abortion clinics are the #1 killer of black Americans.