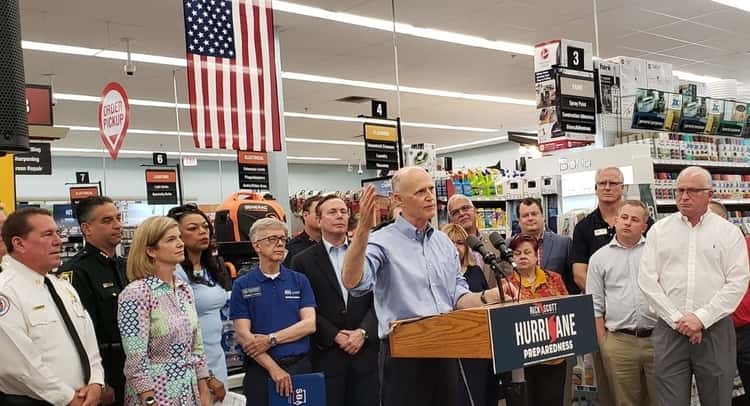 On the fourth day of Rick Scott’s tour across the state of Florida, he made several stops in Jacksonville and surrounding areas, culminating in a Sunday visit to First Baptist Church. On Saturday, Scott visited Ethans Glen Terrace, an upscale neighborhood that counts his son among its residents. Only hours after walking door-to-door to greet supporters in the Jacksonville subdivision, Scott was on the road again —this time, headed to a downtown barbeque.
0
Shares
0
0
0
0

On the fourth day of Rick Scott‘s tour across the state of Florida, he made several stops in Jacksonville and surrounding areas, culminating in a Sunday visit to First Baptist Church.

On Saturday, Scott visited Ethans Glen Terrace, an upscale neighborhood that counts his son among its residents. Only hours after walking door-to-door to greet supporters in the Jacksonville subdivision, Scott was on the road again —this time, headed to a downtown barbeque.

Set against the backdrop of the St. Johns River, the picnic was a celebration of all things Americana. Volunteers wearing “Chicks for Rick” shirts handed out stickers, signs and bubbles for kids, while attendees bearing homemade signs that read “Sportsmen for Rick Scott” ate red, white and blue snow cones.

Anxious supporters cooled off under tents while awaiting the arrival of the gubernatorial candidate’s unmistakable bus, which barrelled in around 6:30 p.m. Scott, flanked by family members — including his wife and mother — exited the bus to the sounds of “Let Freedom Ring,” and was immediately joined by Rep. Mike Weinstein, a Scott friend and supporter.

After citing the country’s high employment rate as reason enough for change, Scott spoke of his “humble background” and business sense as proof that the American Dream does exist: “I know what it’s like to work hard. … I want to change the country’s direction.”

Scott grew passionate when referencing Arizona’s S.B. 1070 immigration bill: “If you come here illegally, [there should be] no amnesty. If someone has violated the law, they should be asked if they are a citizen, just as we would be asked for our driver’s licenses.”

Scott also made remarks about “will-nilly” state spending, and cited regulations as a major problem: “[We need to] freeze regulation, because regulation kills jobs.” Scott promised to cut property taxes across the board in an effort to bring people back to the state: “Currently, there are more people moving out of the state, than in. … I want people to come here.”

In closing, Scott likened the job of governor to another with which he is all too familiar: CEO. His expertise in building companies, he said, would serve him well as the governor of Florida: “I have gone through the same issues building companies in the last 30 years. … Let’s get to work. If we get up and get things done, there’s no limit to what we can accomplish.”

After greeting audience members and shaking hands, Scott was whisked to the barbeque grill, where he tied on a “Rick Scott” apron and grilled up hot dogs for hungry supporters. Scott, who leads opponent Bill McCollum by double digits, continued his tour Sunday, stopping in the panhandle to speak about the economy.

PPolitics
Nebraska’s legislature made a move yesterday toward a ban on ‘Telemed abortions’ in the state, which opponents have pointed out are already outlawed. The legislature gave initial approval of a bill that would make it a felony for doctors in Nebraska to perform abortions through a remote webcam system, which is a program currently being used in Iowa. Kansas and Arizona have already passed legislation that will limit this service in their state.
PPolitics
Sightings of a very large sheen of oil in the Gulf of Mexico have had coastal residents and fishermen worried for over a month. But in a statement issued yesterday, the Coast Guard says the sheen is not from BP's now-capped Macondo well, which caused harm to both Florida's environment and economy last year.