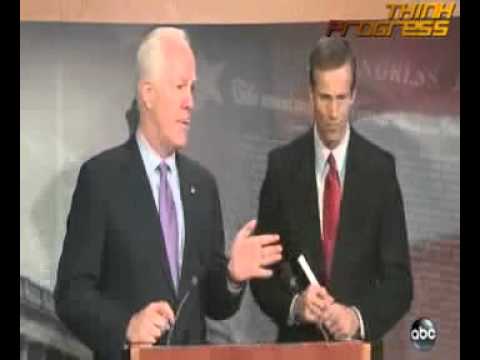 A $1.1 trillion omnibus bill that included $8 billion in earmarks from lawmakers who opposed them was pulled from the Senate after Majority Leader Harry Reid acknowledged that he did not have the votes to withstand a Republican filibuster.
5
Shares
5
0
0
0

A $1.1 trillion omnibus bill that included $8 billion in earmarks from lawmakers who opposed them was pulled from the Senate after Majority Leader Harry Reid acknowledged that he did not have the votes to withstand a Republican filibuster.

All 42 Republicans had threatened to filibuster the bill, despite the fact that two Republican senators — Thad Cochran and Roger Wicker of Mississippi — requested $561 million and $449 million, respectively, in earmarks. Senate Minority Leader Mitch McConnell requested $112 million in earmarks but opposed the measure because he said the 1,924-page bill did not have enough time to be considered.

Sen. John Cornyn, R-Texas, included $95.5 million in earmarks in the bill despite opposing the bill. In a press conference, he could barely defend them to ABC’s Jonathan Karl: “Well this is not just earmarks — earmarks [are] a symptom of wasteful Washington spending that the American people have said they want to be reformed.” When asked whether that was an acknowledgment of wrongdoing, he said he had answered the question and walked away.

The about-face among Republicans represents the power that tea party groups have over legislators as earmarking has become a tangible symbol of wasteful — however infinitesimal in the federal budget — spending. Earmarks are also now available in tables online wherein media and constituents can easily look up projects and grill legislators on them.

“Though some of my Republican colleagues in recent days have publicly distanced themselves from the idea that [they’re] members have a role to play in the appropriations process, nearly all of them did nothing privately to withdraw their priorities from this bill,” Reid said Thursday.

Reid defended earmarks as legislative direction to federal spending. “We have a constitutional duty to dole out congressionally directed spending,” said Reid. “And I don’t want to give up that responsibility. I can’t understand why some of those more conservative members here want to give up their power. I don’t understand that.”

A resolution funding the government at current levels till Feb. 18 will likely pass Saturday.

Reid has also scheduled votes on the DREAM Act (likely to fail) and a standalone version of the repeal of Don’t Ask Don’t Tell (may well pass), which in the defense authorization bill failed to overcome a filibuster. The START treaty will likely be considered later next week.

PPolitics
A bill seeking to exempt depictions of deaths from Florida's public records laws is making its way through the legislature, and freedom-of-information advocates are warning that the repercussions of such a broad measure could be detrimental to the public's ability to hold law enforcement and government agents accountable.
PPolitics
Read More
Three of the front-runners - Robaina, Gimenez and Llorente - are all longtime Republicans. The winner will likely not be decided until after a June 28 runoff.