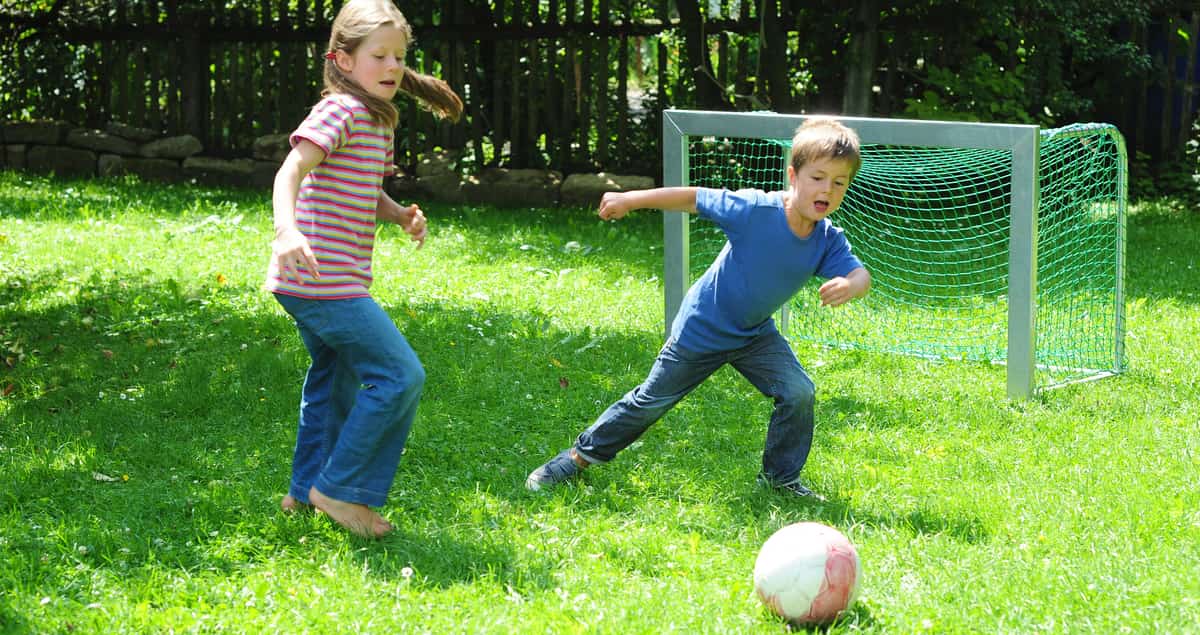 It’s the season we have all been waiting for, summer! Now that we are no longer hibernating, it’s time to turn off the electronics and head outside for some outdoor fun.

Here are 10 ideas for fun yard games the kids and the whole family can get involved in.

This is a classic type of playground games for kids where you will select one person to be Simon.

Simon will stand in front of everyone else and say different commands that the others have to follow. An example of this could be, “Simon says jump up and down three times.”

The trick is that the players can only do the tasks that Simon mentions after “Simon says.”

If they do something that was said without Simon says in front of it, they are out.

The person who stays in the game the longest is the winner.

Capture the Flag Is One of the Great Yard Games

The goal of the game is exactly what the name says: capture the flag!

Capture the flag is fun for the whole family because it requires lots of players. You will need to split into two different teams, and each team has a flag located at their home base.

The teams will need to take turns trying to capture the flags.

If you get tagged trying to capture the flag on the enemies side, you will go into their “jail” area. Your team members can sneak and try to get you out of the jail in order to continue playing.

You win by being the first team to successfully capture the flag.

A Game of Soccer

A casual game of soccer is a fun way to get the family out of the house and to be active.

Open Goaaal USA is the perfect summer accessory to your backyard. If you miss a goal, it will stay within the playing area and not in the neighbor’s yard!

In this game, one person will start out standing and will be “it” while the others will all be sitting on the ground in a close circle.

The “it” person standing will walk around the circle tapping the people sitting, and each time he will say the word duck. When the “it” person decides to say goose, the person who was tapped will then chase “it”.

The goal is to tap them before the “it” person makes it back to the spot of the tapped goose and sits down.

If they make it to the spot and sit down before the goose tags them, the goose is now the “it” player.

This game is quick, fun, and perfect for the outdoors.

Someone will select one child to be the stoplight, and they will stand far away from everyone else. The rest of the players will stand in one line in front of the stoplight.

The stoplight will “Green Light,” which will allow the players to start moving forward. When the stoplight says “Red Light,” the players have to stop wherever they are. If they keep moving, they have to return to the starting line.

The first person to make it to the stoplight will win and become the new stoplight. Then you can start a new round of the game.

Red Rover has two groups of people facing each other. They will link or hold hands with the people in their line.

This is best to play outside because there will need to be a good amount of space between the two lines. Someone will start the game by saying “Red Rover, Red Rover, send (insert name) over”.

The selected player will run across to the opposite team and try to break the line. If the selected player can break through, they are able to steal someone from that line and bring them back to the other team’s line.

If the selected player is unsuccessful, they will have to stay in the other team’s line.

Be Active and Play Kickball

Kickball is great party game to play with a really large group of people. Split everyone up into two teams, and you’re almost ready to get started.

You will need to have a few things to play this game like a kickball or similarly sized ball, an infield, and outfield, four bases, and a home/pitching plate.

The rules of kickball are very similar to America’s favorite pastime, baseball!

If you have a piece of chalk and a driveway or another hard outside space, you are ready to play hopscotch!

You will need to throw a small object like a beanbag forward into the first square, hopping forward with one foot to retrieve the object. Then the second player can start playing.

This continues all the way to square 10 and back towards the beginning. To win, you can’t fall over or miss any squares.

There are so many variations and different hand clapping games depending on where you grew up. Most of these have coordinating rhymes to sing along to while playing.

These games are fun, and you can play them with as little as just two people.  If you’re looking for something that involves a little more coordination for older kids try looking for quality outdoor table tennis tables.

This game is played similarly to Red Light, Green Light.

Someone will select one person to start out as the “mother” while the other players will stand far away in a line.

The children will all take turns asking the selected mother if they can do something. When they ask, they have to start their question with “Mother, may I”.

An example would be “Mother, may I do two lunges?”. If they forget to say those important words, the mother may deny the request or tell them to do something else instead.

The first to reach the mother will be the winner of that game and will start off the next round as the new mother.

It’s All about Fun

Playing yard games and children’s games will help your little ones exercise their bodies and their imagination.

Take a look at other articles for fun ideas to keep your family living a healthy lifestyle this year!

The Definitive Guide to Creating the Best Healthcare Logo