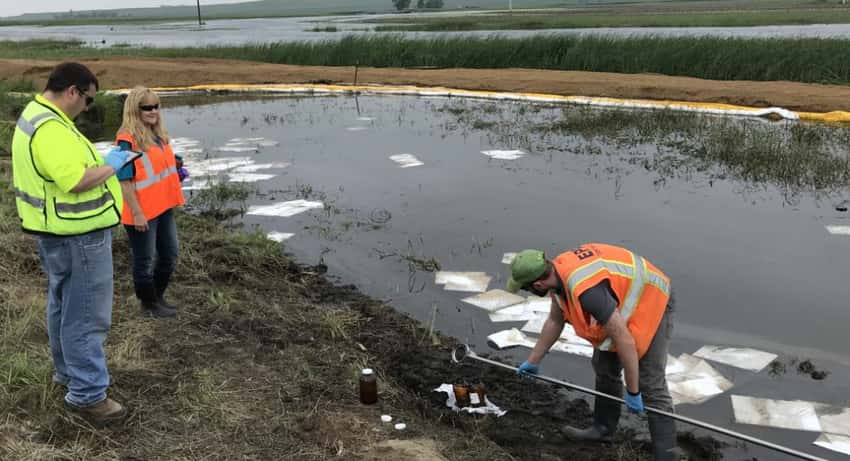 The spill is approaching Florida’s shores. Escambia county, which includes Pensacola, is bracing itself.

The Justice Department announced civil and criminal inquiries into the spill after a meeting between Attorney General Eric Holder and three state attorneys general:

One person briefed on the inquiry said it was in an early stage and that no subpoenas had been issued yet to BP, the owner of the well. It was unclear whether any had gone to Transocean, which leased the Deepwater Horizon, the nine-year-old drilling rig that exploded and sank in April, to BP; Cameron, the company that manufactured a “blowout preventer” that failed to function after the explosion; or Halliburton, which performed drilling services like cementing.

One person not briefed on the inquiry was Florida Attorney General Bill McCollum, who issued a statement condemning his exclusion from the meeting, which included Holder and the attorneys general from Louisiana, Mississippi and Alabama.

I am disappointed the President and his Attorney General didn’t appear to see the Deepwater Horizon incident as a severe threat to Florida’s economy and environment, even though according to the latest tracking reports, the oil spill could likely impact our coast within days. With more than 1,260 miles of coastline, Florida has more coastline than any other state in the continental United States and our environment is a key driver in many of the industries that comprise the foundation of our economy.

A spokeswoman for the attorney general’s office says McCollum expects to be briefed on the inquiry in the near future. The St. Petersburg Times quotes a Justice Department spokeswoman saying the meeting was intended to focus on the three states most heavily affected.

Oil has come ashore in those three states, and now may lurk within eight miles of the Panhandle. Nearly a third of the Gulf is now closed to fishing, and the affected area now reaches the Florida state line.

The end of BP?

Anne Lowry wonders whether the spill — and the ensuing lawsuits — could spell the end of the company.

It depends. First, let us quantify the costs to the company thus far. As of today, BP will have spent $1 billion on the clean-up effort, “including the cost of the spill response, containment, relief well drilling, grants to the Gulf states, claims paid and federal costs.” That includes $40 million paid out on 15,000 economic injury claims.

But, BP grimly notes, “It is too early to quantify other potential costs and liabilities associated with the incident.” What might those add up to? Congress is expected to raise the liability cap to $10 billion. BP owns 65 percent of the Deepwater Horizon site, meaning its liability could be as much as $6.5 billion.
…

And there’s one other major liability that would force BP to close its doors. If the government chose to prosecute BP under the Clean Water Act, it could fine the company $4,300 per barrel leaked into the Gulf — fines independent of the liability cap. If the government won those damages, BP would currently be on the hook for tens of billions — possibly enough to bankrupt the company.

BP, the world’s fourth-largest company before the April 20 blowout on the Deepwater Horizon drilling rig, has lost a staggering $74.4 billion, or 40 percent, of its market value in six weeks.

When will Gov. Charlie Crist call the legislature for a special session to discuss a banning oil drilling in state waters? Not this month, apparently.

Crist, who was in Panama City on Monday to celebrate Memorial Day, told the Florida Tribune that he doesn’t anticipate calling lawmakers back to Tallahassee during the month of June. Crist wants legislators to put on the November ballot a proposed constitutional amendment that would ban offshore oil drilling in Florida waters.

“I think that it probably wouldn’t be until a little later in the summer, that would be my best guess,” said Crist.

Florida’s Democratic congressional delegation has grown impatient. In a letter dated last week, members (including Kendrick Meek, Crist’s Democratic opponent in the Senate Race) urged the Governor to get moving:

[Pic by Mac McClelland via Twitpic]

OOldPolitics
Gov. Rick Scott was presented with this year's general appropriations bill today. He now has 15 days to veto line items and sign the budget into law.
OOldPolitics
Speaking at a town hall meeting in Orange Beach, Ala. on Wednesday, oil spill claims administrator Kenneth Feinberg…