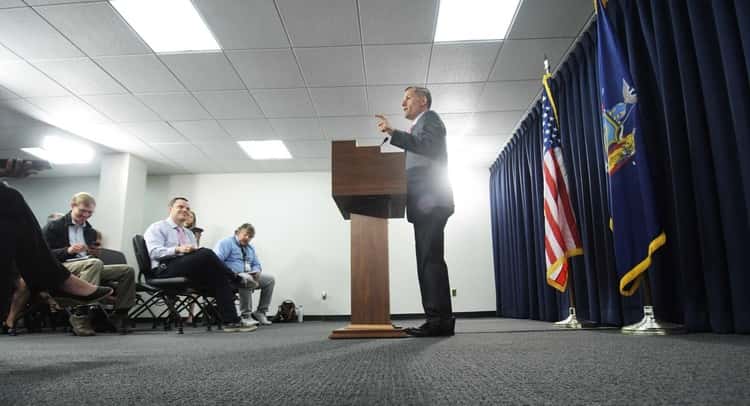 No on 4 campaign closely tied to developers, Republicans

To hear them tell it, the forces arrayed against Amendment 4 represent a broad coalition — Republicans and Democrats, environmentalists and developers, average citizens and the local governments that represent them. But an investigation of the staff and funding behind Citizens for Lower Taxes and a Stronger Economy, the main group opposing the amendment, reveals instead an organization so deeply tied to developers and the Republican Party that it simply cannot be extricated from those interests.
0
Shares
0
0
0
0

To hear them tell it, the forces arrayed against Amendment 4 represent a broad coalition — Republicans and Democrats, environmentalists and developers, average citizens, and the local governments that represent them. But an investigation of the staff and funding behind Citizens for Lower Taxes and a Stronger Economy, the main group opposing the amendment, reveals instead an organization so deeply tied to developers and the Republican Party that it simply cannot be extricated from those interests.

Amendment 4, which would give citizens an up-or-down vote on changes to their local government’s comprehensive land-use plan after those changes have been reviewed by the city or county commission, is universally opposed by developers in the state. It was originally to have been on the ballot in 2008.

“We were derailed by the Chamber [of Commerce] boys,” says Lesley Blackner, president of Florida Hometown Democracy. “Basically, they came up with a petition of their own, bought off all our petition collectors and paid a fortune for people to collect their petitions, and then dumped some 75,000 petitions on Jan. 2, 2008, knowing that on Dec. 31, the Division of Elections had directed all supervisors of elections around the state to validate petitions on a first-come-first-serve basis. So they dump all these petitions on the supervisors knowing that these would tie them up. They spent $6 or $7 million getting this off the ballot, and they say they’ll spend $15 million this time in the fall.”

Blackner, a lawyer by trade who has been trying to get the Hometown Democracy amendment on the ballot for more than six years, has been opposed by developers, and by extension the Republican Party, every step of the way. “If it’s true that the heart of our opposition is real estate developers, well, that’s the heart of the Republican Party in Florida,” Blackner says. “We’ve been opposed by John Thrasher, who ran a revocation effort against us and lied through his teeth saying it was developers who were behind the Hometown Democracy amendment.”

The poll Blackner cites was conducted at the beginning of May, and showed that 61 percent of Floridians, including 54 percent of Republicans, supported Amendment 4. To pass, the amendment needs the approval of 60 percent of voters this November.

Even Ryan Houck, the executive director of the organization spearheading the opposition to Amendment 4, Citizens for Lower Taxes and a Stronger Economy, concedes the numbers in that recent poll. But he does not concede that it means the people are on Blackner’s side. “Colorado and Arizona both defeated measures like Amendment 4 in 2000,” he says. “They started with 80 percent support and ended with 70 percent opposition. … What remains ahead of us is a very long, very robust education campaign. With very few exceptions, those on the right, the left, and anywhere else have opposed this amendment.”

Several anti-Amendment 4 organizations have cited a fundraising target of $15 million in newsletters to their memberships, including the Florida chapter of the Certified Commercial Investors Membership Institute and the Florida Chamber of Commerce.

That a majority of Republicans support the amendment leaves one wondering: Who exactly is Citizens for Lower Taxes and a Stronger Economy fighting for? As Houck explains, the organization is essentially a rebranding of Floridians for Smarter Growth, which led the fight against Amendment 4 in 2008, and of which Houck was also the executive director. That organization, in turn, was established by the Florida Chamber of Commerce and the like-minded business group Associated Industries of Florida. Then-lobbyist and current state Sen. and Republican Party of Florida chair John Thrasher lobbied for AIF, and thus Citizens’ predecessor Floridians for Smarter Growth, to kill the Hometown Democracy Amendment in 2008.

But the Citizens group maintains that its mission is of interest to all. “We don’t view this as a partisan issue,” says Houck, himself a former staffer for Republican Sen. Mel Martinez. “Take a look at our board of directors. Our president is the president of the Chamber of Commerce. But it also includes South Bay Mayor Clarence Anthony, a Democrat.”

But Houck doesn’t mention the job Anthony took upon leaving political office in 2008 — executive vice president and chief marketing officer of PBSJ, one of the largest developers engineering consulting firms in the state. The mirage of broad support plays itself out throughout the Citizens’ endorsement list. For example, the environmental groups 1000 Friends of Florida (sponsored by, among others, the massive land-development company St. Joe) and the Florida Forestry Association (whose website discusses wood pulp and lumber as much as it does forest conservation) are highly touted. In all, the website lists more than 300 groups, nearly all of the city governments, chambers of commerce, developers, contractors, and realtor associations.

Along with those endorsements, the Citizens’ website, florida2010.org, also shows some downright scary numbers, including an estimate that the amendment would cause the loss of 267,000 jobs. This number, and the other job-killing evidence cited by Houck’s organization, come from a study by the Washington Economics Group, a consulting group that promises to “meet client objectives … through customized economic and business consulting services for corporations and institutions based in Florida and in the global economy.” The client, in this case, the entity that paid for the study, was the Florida Chamber of Commerce, the same business group behind Citizens for Lower Taxes and a Stronger Economy, a fact even Houck acknowledges. Houck calls the WEG experts in their field. Blackner calls them “bought-and-paid-for hacks.”

And so it goes, down Citizens’ website, all the way down to the address at the bottom, which is that of campaign treasurer Nancy Watkins, who has been a go-to financial consultant for Florida Republicans for about a quarter of a century. She served first as a campaign treasurer for Connie Mack and then for dozens of Republican campaigns and PACs, including the Connie and Prescilla Mack Foundation and state Sen. Jeff Atwater’s Preserve the American Dream PAC.

The American Issues Project, a group funded by Swift Boat Veterans for Truth money man Harold Simmons, which ran anti-Obama ads in 2008 with murky claims about Obama’s ties to Bill Ayers, also lists Watkins’ Tampa address. “The breadth of the opposition saying we need to stop Amendment 4 to save Florida’s economy is like almost no other issue I’ve seen,” Houck says. But upon closer inspection, No on 4 Democrats are developers, No on 4 environmental groups are greenwashes and No on 4 studies are produced by the very groups opposing the amendment.

PPolitics
A bill requiring schools to give parents of students entering the sixth grade information about HPV vaccines passed in a Florida Senate health committee today.
PPolitics
Read More
The U.S. economy added 227,000 jobs in February while the unemployment rate remained at 8.3 percent, according to an employment report issued Friday by the U.S. Bureau of Labor Statistics.