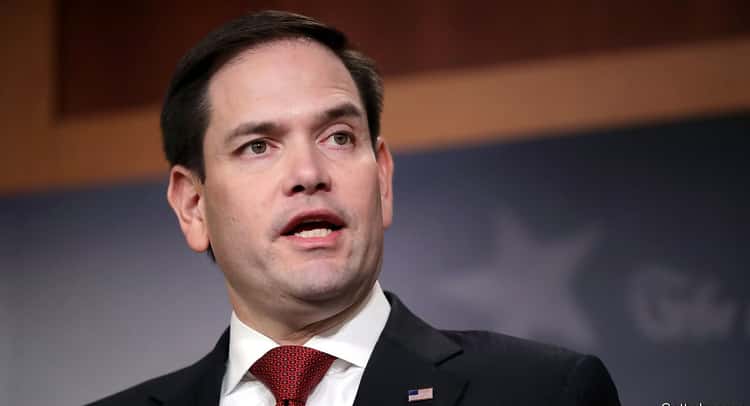 “The bottom line is that there is going to be drilling off the coast of Florida. There is right now. Other countries are going to be drilling, Cuba, Venezuela, China, Brazil, and Russia. The issue is not whether there is going to be offshore drilling, it’s whether America will benefit from it,” he said in an interview on MSNBC’s Morning Joe — broadcasting from Pensacola instead of New York — on June 11. “I don’t think any of that is a premature conversation,” he added towards the end of the interview.

On CNBC the same day, Rubio said to host Larry Kudlow, “In the long term, offshore drilling has to be part of our overall energy strategy.” He added, “Other countries are going to do it, and if they have an accident, that’s going to impact [the U.S.] just the same.”

To the Christian Broadcasting Network on June 15, he said, “I maintain that offshore drilling is going to happen whether we’re for it or against it because Cuba’s going to drill off its coast. We know China and Russia and Venezuela and Brazil are all exploring in the gulf and off our coasts. I don’t know if it would make us feel any better if it was a Cuban oil rig that blew up and leaked water and petroleum into our waters.”

Rubio overstates the foreign threat of drilling — Cuba does not have the technology to drill offshore, but it has leased several Production Sharing Agreements (PSAs) to the state oil companies of Venezuela, Brazil and others. “All of the companies drilling off of Cuba have concessions in the U.S.,” said Jorge Piñon, a Visiting Research Fellow at the Cuban Research Institute at Florida International University and a 32-year oil industry veteran. Russian and Chinese companies do not have any offshore concessions, said Mr. Piñon.

Offshore drilling is banned under federal and Florida law. Florida law bans drilling in a 3- to a 10-mile radius from the coast, while federal law prohibits deepwater drilling in the eastern Gulf of Mexico, as well as in environmentally sensitive areas like the Florida Keys. Former Gov. Jeb Bush — who is said to have mentored Rubio — strongly opposed shallow-water offshore drilling as governor.

Rubio is slipping in the polls, in no small part because of the oil spill. A Florida Chamber of Commerce Political Institute poll released Friday showed Rubio trailing Crist by nine points — a larger margin than in any previous poll since Crist declared his independent candidacy in late April. That same poll showed “education and the oil spill” as the number two concern of voters, behind “jobs and the economy.” (The poll did not disaggregate the issues.)

As a political matter, Rubio is banking on consistency, in contrast to his rival, Charlie Crist, who has changed his position on abortion, teacher’s unions, “don’t ask don’t tell” and offshore drilling. (Rubio’s spokesman repeatedly highlighted his “longstanding, consistent” position on drilling to The Florida Independent.) “Their rhetoric has backed them into a corner,” said Jim DePeso, policy director for Republicans for Environmental Protection. “I think Republicans have gotten themselves into a box ever since Michael Steele got up at the 2008 convention and chanted, ‘Drill, baby, drill.’” He thinks Rubio could go further. “He could say, ‘We’ll be drilling for oil, but there are places we shouldn’t do it. I don’t want to see drilling off the beaches of Pensacola and Tampa.’”

Rubio is alone in the Senate race in supporting offshore oil drilling. In June 2008, Gov. Crist once said he favored “at least a study” of offshore drilling, but said of drilling in late April, “It’s clearly not clean enough after we saw what we saw today — that’s horrific — and it certainly isn’t safe enough. It’s the opposite of safe.” Crist now supports a state constitutional amendment — in addition to already-existing state law — banning offshore drilling through a special session of the Florida legislature. Both Democrats running for U.S. Senate, Rep. Kendrick Meek and Jeff Greene, oppose offshore drilling off Florida’s coasts.

Though the oil spill is becoming the worst environmental disaster in U.S. history, it is also hurting Florida’s economy and its biggest industry: tourism. The Wall Street Journal reported that the panhandle generates between $6 billion and $11 billion in revenue, mostly between Memorial Day and Labor Day. Tourist bookings are down because of the oil spill, which could not only cause damage to the local economy (still hurting from an 11.2-percent statewide unemployment rate), but also state tax revenues that rely heavily on tourism in lieu of a state income tax. Even in South Florida, many hotel and restaurant owners are worried that their business will be affected by the oil spill because foreign tourists will think the oil is washing up on all of Florida’s beaches. For its part, BP has given $25 million for an ad campaign promoting tourism in Florida.

“[Rubio] has always been in favor of offshore drilling so long as it can be done safely and recognizing that short- and long-term energy needs will require America to become more energy independent,” said Rubio campaign spokesman Alex Burgos. “His longstanding, consistent position is based on the understanding of the short term and long term, and we have an energy dependence problem: We rely on hostile regions, hostile areas.”

However, a study released by the Collins Center for Public Policy said drilling would have “no discernible impact” on the dependence on foreign oil. The amount of oil estimated in Florida’s state waters would only satisfy U.S. demand for “less than a week,” and oil in the Eastern Gulf of Mexico would only boost production by 1-2 percent.

Some of the most pro-drilling Republicans have gotten the message that they need to ease their rhetoric. Rep. Cliff Stearns, a Florida Republican who aggressively backed offshore drilling in the 2008 election, has softened up somewhat. “I also support the president’s decision to suspend any new exploration until such investigation is completed and any new safety measures are implemented,” Stearns told Ocala.com. Rep. Joe Barton’s apology to BP for getting a “shakedown” from the Obama administration drew such outrage that many Republicans think that he may be booted from his seat on the Energy and Commerce Committee.

Not Rubio. On Laura Ingraham’s radio show Wednesday, he said that changing positions was one of the problems in politics: “They just want to be on 51 percent of every issue. Their positions change as the polls change.” He compared the effort to end offshore drilling to curtailing nuclear power after the Three Mile Island incident. “We cut off our nose and hurt ourselves in that effort.” He closed, “We’re starting to see some of the same things pursued here. … People and industries are going to pay a price for years and perhaps decades to come.”