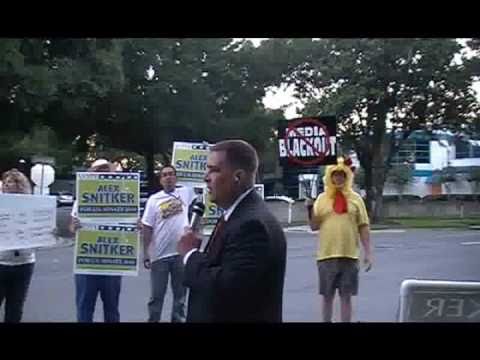 Libertarian Senate candidate Alex Snitker has been feeling the effects of little media coverage for a while. In addition to campaigning for the U.S. Senate against Marco Rubio, Kendrick Meek, and Charlie Crist (none of whom seem to be lacking for media exposure), Snitker has been campaigning fiercely for something else — inclusion in debates.

During a St. Augustine tea party rally, Snitker was vocal about the fact that his inclusion in the debates would be a leg up for his campaign: “The important things for the campaign right now are getting back in the news and debating. … Whether you are a Rubio supporter, or a Crist supporter, or a Meek supporter, you should be able to accept, or be supportive of the fact, that I should be included in the debate. The only thing in this race I’ve ever asked for is the equal opportunity to be able to speak.”

Last week, the Snitker campaign announced a planned protest of the television station that hosted one Senate debate, saying that the candidate “intends to be part of the debate even if he is not allowed in the studio.” Rather than debate the candidates directly, Snitker answered the moderator’s questions outside the studio, in front of his fellow protestors. In a video of the protest on Snitker’s YouTube channel, he calls his opponents “cowards” who “lack principles.”

But according to a media release by Snitker’s campaign, support for his inclusion in the debates has recently come from an unlikely source: fellow Senate candidate and current Florida Gov. Charlie Crist.

In a surprise statement, Governor Charlie Crist has agreed to debate Libertarian U.S. Senate candidate Alexander Snitker. The two candidates spoke in person at the United Voices for America candidate forum in Tampa on Sunday, where Snitker asked Crist if he would agree to include him in the upcoming televised debates. Crist responded to the question on camera by saying, “I’d love to have you [in the debates]…Sure, we’d love to have you.”

Snitker, who has thus far been blocked from attending the debates, is widely believed to be in a solid fourth place position in the Senate race. Many political pundits expect his smaller-government, individual liberty platform to garner between 5-12% of the vote, even though he has received virtually no media exposure.

“I look forward to debating the other candidates in this race, and sharing the Libertarian plan to restore our Constitutional Republic with the people of Florida,” said Snitker. “And maybe, my being on stage will restore some of the decorum and statesmanship that was lost during the debate last week.”

PPolitics
Rep. Ted Deutch, D-Boca Raton, appeared on MSNBC's Dylan Ratigan Show yesterday to discuss a newly proposed amendment to the Constitution he introduced to reform campaign finance in the U.S.
PPolitics
Politico reported this morning on how the ethical troubles of Rep. David Rivera, R-Miami, are affecting his relationship with the House GOP caucus in Washington. Neither Majority Leader Cantor nor Speaker Boehner have said anything publicly since Rivera is still under investigation by Florida law enforcement, but quietly, they are frustrated and even planning for his replacement.