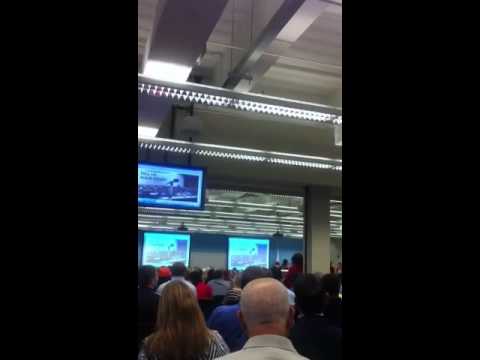 Jacksonville redistricting hearing brings out concerns and, again, a request for maps

Show us the maps. Much like attendees at Florida’s first public redistricting hearings in Tallahassee, speakers at yesterday’s hearing in Jacksonville argued that lawmakers need to edit their redistricting timeline and release maps soon, so that the public can comment on specific redistricting proposals.
0
Shares
0
0
0
0

“Show us the maps.” Much like attendees at Florida’s first public redistricting hearings in Tallahassee, speakers at yesterday’s hearing in Jacksonville argued that lawmakers need to edit their redistricting timeline and release maps soon so that the public can comment on specific redistricting proposals.

“This ‘listening tour’ is the minimum required by law,” said former congressional candidate Jay McGovern, addressing the lawmakers present at the hearing. “We expect more of you. Stop fighting us with our own money. … Let’s talk about the 800-pound gorilla in the room. It’s about power, and the incumbents clinging to it.”

The calls for maps were perhaps even more fervent than in other areas, due to one district that some say is the most gerrymandered of them all.

Democratic Rep. Corrine Brown represents Florida’s Third Congressional District, which stretches over 100 miles and includes portions of both Jacksonville and Orlando. Brown spoke passionately about the importance of keeping minority representation in Florida. Calling her district the “most popular” in America, due to the significant media attention it has garnered, Brown said that minority representation was paramount in Florida.

“When America has a cold, the African-American community has pneumonia,” said Brown. “We have a high unemployment rate and it’s very important that we remain in the room.”

Only a day after the so-called “Fair Districts” amendments (5 and 6) passed, Brown and fellow Rep. Mario Diaz Balart, R-Miami, filed suit to block them from taking effect. Both Brown and Diaz-Balart represent districts saturated with minority voters, a fact that continually came up during the hearing.

Critics, like the ACLU’s Benetta Standly, argued that the issue shouldn’t be strictly about race. “Amendments 5 and 6 added minority rights protection,” said Standly. “However, we need information on how many minority districts are located where. Please stop wasting our taxpayer dollars, and draw the maps. Then, perhaps the lawsuits will cease.”

Deborah Courtney, a Jacksonville Beach resident, said she attended a similar hearing 10 years ago, at which she was promised that district lines would be drawn fairly. Holding up a map of her current district, Courtney said that she was attending today’s hearing to ask the same questions she asked 10 years ago. “On the one hand, you are having these hearings,” she said, addressing the lawmakers. “On the other hand, this same legislature is a party to lawsuits against 5 and 6. It really makes me question your commitment.”

Like several other speakers, the ACLU’s Standly argued that the hearing was not a “real conversation,” and that maps were necessary before the next election cycle could commence. “You invite public comment and you give us nothing to comment on,” she said. “People who want to run for office don’t even know what district they are in.”

PPolitics
Judge Alan Gold is slated to hold a highly anticipated and crucial hearing tomorrow concerning the restoration of the Everglades, in which he will approve or deny an EPA-developed plan that will halt agricultural poisoning in the area.
PPolitics
With the end of this legislative session a mere two weeks away, state lawmakers are no closer to implementing a state health insurance exchange program that is mandated through the Affordable Care Act. As the deadline for the mandate looms, the state risks having the federal government step in and create a program in place of the state.