At an intimate meet-and-greet held on Sarasota’s Main Street this morning, GOP Senate candidate and former Florida House Majority Leader Adam Hasner pitched himself as the principled conservative in the race, asking the small crowd to help him fight Washington and save the United States.
1
Shares
1
0
0
0

At an intimate meet-and-greet held on Sarasota’s Main Street this morning, GOP Senate candidate and former Florida House Majority Leader Adam Hasner pitched himself as the “principled” conservative in the race, asking the small crowd to help him “fight Washington” and “save” the United States. #

The Hasner campaign has touted its strategy of connecting with grassroots supporters at the expense of big fundraising totals, and today’s Sarasota event brought out a handful of important local conservative faces — Sarasota Republican Party chair Joe Gruters and right-wing blogger and radio host Richard Swier among them. After attendees helped themselves to free coffee and patriotically decorated doughnuts, Hasner delivered a speech that reiterated a common refrain of his: “Republicans don’t need to be less partisan. They need to be more principled.” #

Suggesting that America’s current political debates are part of a “battle for the heart and soul of our country,” Hasner spoke about the “deterioration” of the American family and our “Judeo-Christian” values, which he says has led to greater dependence on a “faceless government.” Hasner also described his Broward County upbringing, saying that being a conservative in the Democratic-leaning region is “kind of like fighting behind enemy lines.” #

Hasner repeatedly called for cuts to government spending, saying the departments of Education, Housing and Urban Development, and Transportation would be the first agencies he would reduce. Addressing President Obama’s health reform legislation, Hasner said that if the law is implemented, he’s not sure America can “come back.” He warned that the U.S. would begin “to look even more like Eastern European countries.” #

While he declined to overtly criticize any of his GOP rivals in the Senate primary, Hasner did argue that it’s not enough for conservatives to just send any Republican to Washington. He said he wants to “challenge the status quo” in both parties. He cited Sen. Jim DeMint, R-S.C., as a kindred spirit, perhaps a nod to DeMint’s close relationship with Sen. Marco Rubio, R-Fla. #

Hasner’s campaign has struck a chord with local Republican activist Tad MacKie, who called the candidate “a good guy.” Still, as Mackie points out, the Senate primary is just beginning, and he says most rank-and-file party members have not made up their minds about whom to support. “I’m sure there are some that have picked their horse,” MacKie said. But, “Nobody’s saying.” # 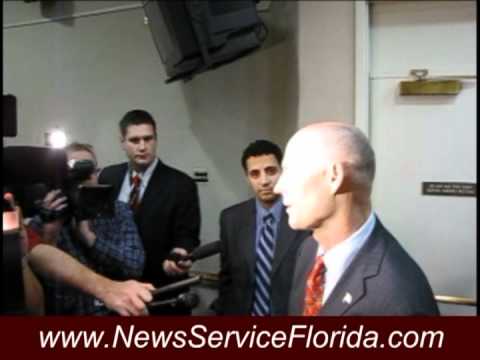 Read More
Gov. Rick Scott, who has been mostly silent on the plan to privatize 27 prisons currently moving through the Florida Senate, told reporters he is hopeful the state Senate will pass its bill.
OOldPolitics
Via The Miami Herald’s Naked Politics: “Joe Barton, the Texas Republican who famously apologized to BP – and then…