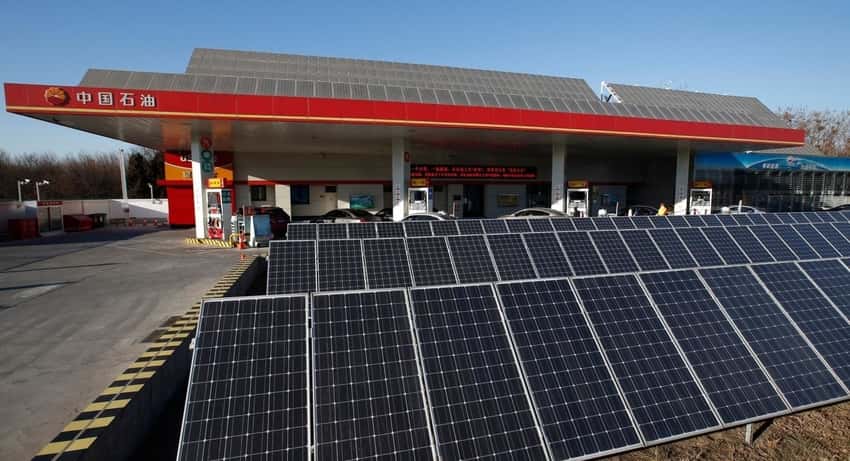 Politicians tend to portray the clean energy movement as a zero-sum game, but advances in China can boost the American economy.
0
Shares
0
0
0
0

In a last-ditch effort to build support in the Senate for a comprehensive climate bill this July, President Obama told the White House press corps that a failure to pass the legislation could help cement China’s position as the world clean energy industry leader.

“We can’t stand by as we let China race ahead to create the clean energy jobs and industries of the future,” he said. “We should be developing those renewable energy sources, and creating those high-wage, high-skill jobs right here in the United States of America.”

Conjuring up images of the Cold War, the race metaphor has become a go-to talking point for American politicians during the last year. By all accounts, the United States is getting lapped in the race for the so-called clean energy economy. During the last year or so, the Chinese government has made huge strides in reducing its carbon dioxide emissions and, above all else, making the country a veritable testing ground for research, development and large-scale deployment of wind and solar technology.

The United States, on the other hand, has failed to pass even scaled-back energy and climate change legislation. The Obama Administration is betting that there is still hope — that the clean energy race is not yet won and the United States can come out on top.

But some experts say that while competition is essential, the metaphors used to describe our relationship with China on energy and climate change fail to account for a number of nuances, including the fact that the global supply chain makes any one country’s border less clear. In a sense, America and China are more like partners in a relay race, where each country’s advances helps the other get ahead.

Edward Steinfeld, a political economy professor at the Massachusetts Institute of Technology and director of the school’s China program, argues that framing the relationship between the United States and other countries as a race is “sort of divorced” from the way technology is developed and deployed. The parts necessary to manufacture a wind turbine, for example, are likely produced all over the country by multinational corporations.

“We’re talking about complicated systems,” he says. “We’re not talking about a shoe. Usually these systems involve constellations of companies, in most cases global companies. In the end, it’s really hard to identify exactly what flag is on any given product.”

Because China has positioned itself as a clean energy leader, many companies are looking to China to conduct necessary research and development. In order to bring costs down, research and development must be done in the location where the product can be deployed on a massive level. Right now, Steinfeld said, that place is China.

But although technologies are fine-tuned in China, they are not always manufactured by Chinese companies. For example, several years ago, as part of a massive effort to reduce greenhouse gas emissions from the country’s rapidly growing industrial sector, the Chinese government declared that all coal plants must install technology that keeps sulfur dioxide from entering the atmosphere.

“Out of nowhere, the world’s biggest market for smoke-stack scrubbers was in China,” Steinfeld says.

Though local technology companies came forward to design the scrubbers, the Chinese government opted to use designs from Europe, Japan and the United States, partly because there was little confidence in the skills of local companies and partly because the foreign technology was more developed, Steinfeld said.

The same thing is now happening with other Chinese policies. The country is looking outside its borders, and foreign companies, including many in the United States, are eager to step up to the plate.

“If you’re an American company, of course you’re going to go to China,” Steinfeld says. “Where else are you going to go? You need to team up with the people that are going to let you develop the technology.”

Because companies are able to use China as a testing ground for their clean energy technologies, the price of solar panels and wind turbines has gone down.

“I think the most tangible impact of China’s energy policies is that we’re now buying not just wind turbines, but solar panels from China,” says Sierra Club Director of International Climate Policy John Coequyt, “and the price of those products is very competitive.”

Therein lies the problem for many in the Obama Administration and elsewhere. Though in some ways it’s good that Chinese development has made the cost of parts for wind turbines and solar panels cheaper, it makes it much more difficult to develop a domestic clean energy manufacturing base here in the United States.

The United Steelworkers, in a September petition to the Obama Administration, argue that China is unfairly subsidizing exports to encourage companies in the country to send their clean energy products around the world. At the same time, the union accuses China of limiting the exports of certain rare-earth minerals necessary to produce solar panels so that foreign companies will settle in the country.

Both of these charges would be violations of international trading rules, and the United Steelworkers are hoping the Obama Administration will raise the issue in front of the World Trade Organization. “I do think they will take up some of this because some of it is so obvious,” says Linda Andros, legislative counsel on trade law issues at the United Steelworkers. “They don’t have to. They have discretion. But on the merits the case is there. The blatant stuff you’ve just got to take up.”

But some experts argue that regardless of whether the United States can compete with China on clean energy manufacturing, expanding U.S. reliance on wind and solar will create local jobs that can’t be exported to China.

Lutz Weischer, research analyst at the World Resources Institute, says many solar facilities create a significant number of local, American jobs. “If you look at job creation in the solar industry, most jobs are in construction, installation and maintenance,” he says. “Those jobs have to be local. If you import panels that are cheap, you’re able to install more panels and create more local jobs.”

“That’s the thing you have to weigh. It’s pretty likely that you’ll have less manufacturing jobs in the United States,” he says. “But you have to look at the entire supply chain. You’re gaining jobs elsewhere.”

Weischer also says that Chinese manufacturing has helped to lower the cost of solar panels, which fell in price by some 40 percent between 2008 and 2009. “Even though this decline has a number of reasons — including technological progress, less demand due to the recession and changing policies in Spain, etc. — it would not have been possible without China producing large quantities of low-cost modules,” says Weischer.

The Chinese market is also important because it often functions as a “laboratory” to test new technology. Because the United States has lagged behind other countries in developing a stable investment environment for the wind industry, for example, General Electric has focused much of its attention on China. It recently announced a partnership with Harbin Power Equipment, a Chinese company, to expand its presence in the country, which currently has the largest wind market in the world.

For these reasons, Weischer says the race metaphor might not work for the relationship between China and the United States on clean energy. “The problem with the race image is that it suggests that only one country can win,” he says. “But if you look at wind, every country that has decided to focus on wind has won. You win if you decide to play.”

Like other experts, Barbara Finamore, China program director at the Natural Resources Defense Council, says the clean energy race metaphor oversimplifies the way global supply chains work. “Race is not necessarily the right term here,” she says. “Because of the way supply chains are interconnected, you can’t win the clean energy race by banning technologies from other countries or by banning investment because it hurts U.S. companies.”

There are a number of examples of Chinese companies coming to the United States and creating jobs for American workers. Suntech, a Chinese solar company, began production this month at a solar manufacturing facility in Arizona, the first in the country. The facility will create almost 100 American manufacturing jobs.

At the same time, despite initial resistance, the United Steelworkers signed an agreement in August with A-Power Energy Generation Systems, a Chinese company, to allow the construction of a wind power plant in Texas and a wind turbine manufacturing plant in Nevada. Despite the fact that the company is Chinese, the thinking goes, the jobs created will be American.

Finamore says there are a number of reasons that China is eclipsing the United States in terms of its clean energy development. But at the end of the day, the main reason is because the United States has not enacted policies that create a stable investment climate.

“The countries that establish strong national policies to reduce greenhouse gas emissions and incentivize renewable energy are the ones that are establishing strong positions in the clean energy economy,” she says.

PPolitics
A newly proposed spending bill from U.S. House Republicans would dramatically cut funding for comprehensive sex education and increase spending on abstinence-only education programs.
PPolitics
On Wednesday, a U.S. House subcommittee will discuss a bill filed by chair Lamar Smith, R-Texas, that would require the use of E-Verify, the federal program that verifies if a worker is authorized to work in the U.S.
PPolitics
Florida's Bright Futures program might see some changes in coming months, according to a new report by Capitol News Service.
PPolitics
In an order filed yesterday in a U.S. District Court in Jacksonville, Judge Roy Dalton fined a car dealership once owned by Rep. Vern Buchanan, R-Sarasota, nearly $68,000 for illegal campaign contributions.
PPolitics
Representatives from two civil rights groups met Attorney General Pam Bondi Wednesday, asking her to avoid turning back the clock on the unfinished business of the civil rights movement.
PPolitics
The groups involved in the immigration debate unfolding now in the Florida legislature seem to agree on one thing: The laws proposed in Florida are a response to inaction at the federal level.