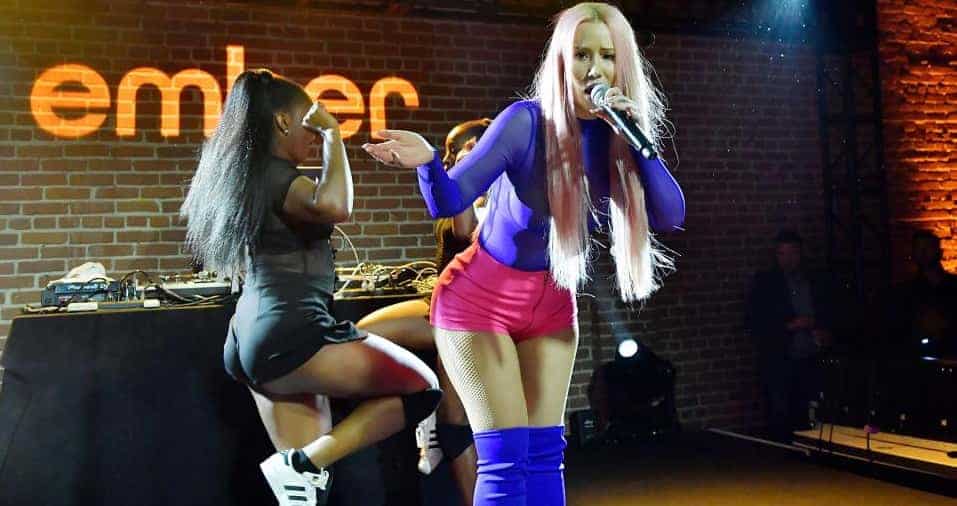 Artist Iggy Azalea’s promotional event at Goya Studios for the Ember product launch was notable for Azalea’s outstanding performance and curve-clinging attire. However, the glitz, glamour, and glowing, red-brick, ambiance of the sound stage was not enough to disway the question on everyone’s mind, “Is Iggy’s butt real?”

The sexy siren sashayed her way around the Hollywood sound stage in skin-tight leather pants and a tight, backless, strappy, satin top with the phrase “ I was born to raise hell” emblazoned on the front. The leather pants and top are reminiscent of the late ’90s to early 2000s (think Spice Girls minus the platforms). Iggy’s silky long hair was trending with a pink ombre’ and blonde shadow root. The starlet completed the look with hot pink, suede, stiletto booties to match her hair, reminiscent of Barbie and the Rockers.

The outfit accentuated Azalea’s figure, to say the least. Her tiny waist and “big, big booty” call to question the composition of that booty. Rumor has it that Azalea has had a butt lift.

Iggy has vehemently denied these claims, stating that she has been honest about her nose and breast surgeries, so why would she deny the butt lift rumor? Azalea says that plastic surgery is not something to hide and be ashamed of. “Denying it is lame” according to Azalea. “…..which is why I’ve spoken about the changes I’ve made….”.

The changes that Azalea refers to are to her breasts and nose.

While many have their doubts, the singer is defending the legitimacy of her bum by claiming that her figure is thanks to diet and not surgery. A body-specific diet, coupled with the right attire is what creates the pear shape that is Iggy.

Azalea’s shiny pants create an enlarging effect. The tiny top and heels for lift also add to this bootylicious vision.

Iggy owned the sound stage in a pair of vibrant pink short-shorts and purple, leather, thigh-high boots with fishnet tights. The relatively high-waisted, bright, shorts and darker top assist in creating the optical illusion of a ginormous booty.

Also enhancing the partial illusion of grandeur is Iggy’s teeny, tiny waist. Azalea has a very slim waist that she keeps through a strict diet. “I never get to eat what I want,” says the star.

So, it would appear that Miss Azalea has no reason to deny having plastic surgery on her bottom when she has already spoken out about her breast and nose procedures. Honestly, the debate is really over a moot point; since, either way, Iggy Azalea is an amazing entertainer and looks fabulous.

Health Elevated: How Essential Oils Can Make all the Difference