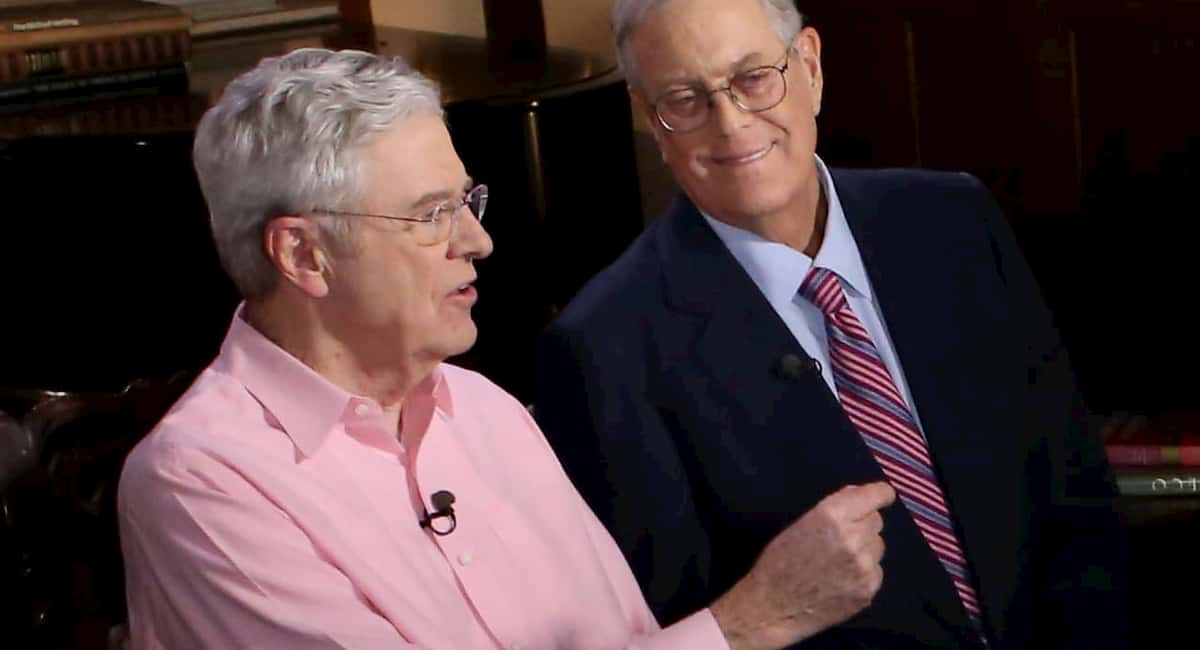 According to audio recordings of a retreat hosted by the billionaire Koch brothers in Colorado this past June, wealthy donors with Florida ties gave more than $1 million each to the brothers’ cause.
0
Shares
0
0
0
0

According to audio recordings of a retreat hosted by the billionaire Koch brothers in Colorado this past June, wealthy donors with Florida ties gave more than $1 million each to the brothers’ cause.

Mother Jones filed a report today about the “unprecedented recordings” that “provide a behind-the-scenes look at how the Koch brothers and their comrades talk when they gather.” The Koch brothers are notorious for raising large amounts of cash for their right-wing agenda.

Among those gathered at the brothers’ shadowy June retreat was Gov. Rick Scott.

According to Mother Jones, the event included “a pair of keynote speeches and remarks by brothers Charles and David Koch, who spell out their political aims and name some of the ‘great partners’ who have contributed millions of dollars to their causes.”

The list of almost 30 “great partners” were John Moran from Palm Springs, Fla., and Rich and Helen DeVos, owners of the Orlando Magic.

The DeVos family owns Florida’s Orlando Magic. According to Mother Jones, Rich DeVos is the cofounder of Amway and is worth around $4.2 billion.

The DeVos Foundation is a big contributor to Christian right organizations. According to Media Transparency, the Foundation is “associated with numerous other Christian and conservative organizatons, such as the Council for National Policy, the Chairman’s Council of the Conservative Caucus, the Free Congress Foundation, and the Federalist Society for Law and Public Policy“:

His foundation’s grantmaking reflects these conservative Christian tendencies and affiliations. In fact, Helen DeVos told the Grand Rapids Press that “our biggest priority is to give back to Christian causes.” The foundation ranks eighth in the top 50 U.S. foundations awarding grants for religion, circa 2000, as published by the Foundation Center.

Among the top 20 foundations studied, the Richard and Helen DeVos Foundation ranks fifth in total conservative policy giving, providing $12,159,101 between 1999 and 2001 to groups such as Focus on the Family, the State Policy Network, the Intercollegiate Studies Institute and other nationally influential public policy organizations in the fields of education, advocacy, research, religion, media and law. The foundation also provides grants to local (for instance, western Michigan and central Florida) churches, arts groups, ministries, and Christian Schools.

When asked about the retreat, Scott told The Buzz “he was asked to speak about his initiatives and covered education, taxes, Medicaid reform, drug testing welfare recipients, public employee pension changes and jobs.”

Via The Miami Herald,:

“It was very interesting,” Scott said. “They wanted basically to know what am I doing in Florida.

He said he found the sessions useful. “In this job, you’ve got to constantly listen to what other people are thinking. Part of what you do in business is you say, ‘Gosh, they are doing something, well, I’m going to see if I can do it better.’ The same with this … OK, what are people doing that is working in their states?”

PPolitics
Read More
State Rep. Gayle Harrell, R-Port St. Lucie, today filed a bill that would require every private employer to use E-Verify, the electronic federal database, to verify if an immigrant is authorized to work in the U.S.
PPolitics
Well, that didn't take long. One of the few bright spots for progressive organizations in Florida on election day — the passage of Amendments 5 and 6, which