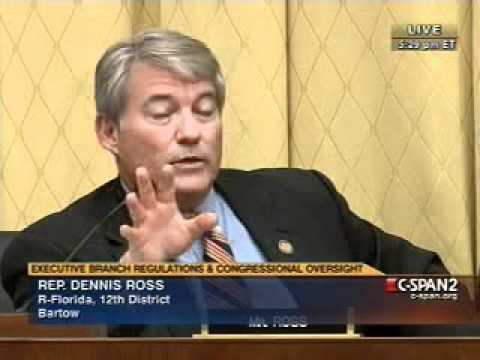 In a tweet sent out this morning, Rep. Dennis Ross, R-Lakeland, says that the EPA must stop using activist/ junk science or lose their funding.
0
Shares
0
0
0
0

In a tweet sent out this morning, Rep. Dennis Ross, R-Lakeland, says that the EPA must stop using “activist/ junk science or lose their funding.”

According to his Twitter account, Ross will be meeting with EPA Administrator Lisa Jackson today, one-on-one. Jackson has been criticized for her role as the head of the agency now often deemed a “job killer” and has been especially scrutinized for her role in a set of numeric nutrient criteria that are mandated for the state of Florida. The criteria would place more stringent limitations on nutrients like phosphorus and nitrogen, which are often found in industry effluent and are largely responsible for the growth of harmful algal blooms and fish kills.

During a January subcommittee meeting, Ross said that the regulatory risk that exists is “almost not manageable” and would cost millions to the phosphate, property, and agriculture industries. Ross failed to mention the cost that water pollution poses to fishing, tourism, or waterfront real estate.

In a June press release, Ross said that the EPA needed to “take the plunge and end numeric nutrient nonsense” and that Floridians can take care of their own water. “Water is Florida’s lifeblood and no one knows how to take care of that lifeblood better than Floridians,” said Ross. “We welcome anyone from EPA to Florida – as a tourist.”

OOldPolitics
Sen. Bill Nelson, D-Fla., is taking on the state's controversial new voting rules with full force. Days after requesting a congressional hearing on the law, Nelson has sent a letter to U.S. Attorney General Eric Holder requesting that the Justice Department launch an investigation into whether the new state voting laws resulted from collusion or an orchestrated effort to limit voter turnout.
OOldPolitics
Tom Liberti, chief of the Florida Department of Health’s Bureau of HIV/AIDS confirmed to The Florida Independent that his office has announced a proposal to reduce eligibility for HIV/AIDS patients who get their medication through the state's AIDS Drug Assistance Program.