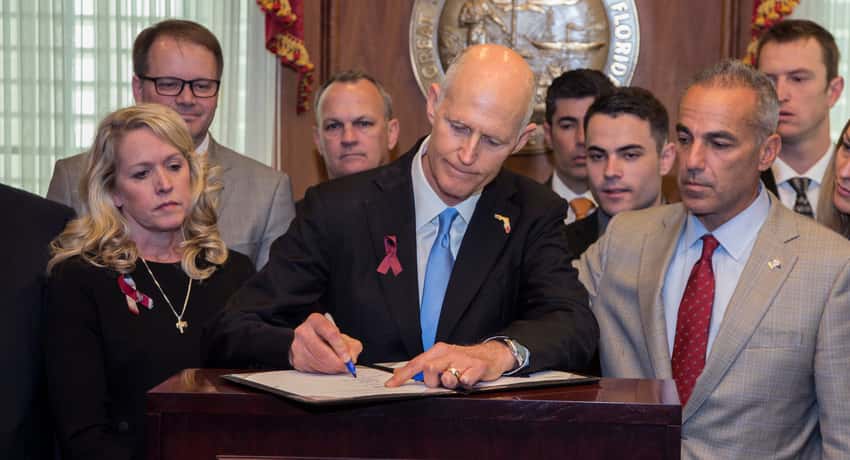 Florida’s campaign finance laws are under assault this election season by conservative groups hoping to reduce government oversight on how they spend money on political ads.

Last week the Institute for Justice, which bills itself a “libertarian public interest law firm,” filed suit in federal court to overturn the state’s spending limits on political ads. The suit (.pdf) was filed on behalf of four Sarasota-area men who oppose Amendment 4, a proposal that would require voters to approve land-use changes.

The plaintiffs argue that before they are able to air a radio ad opposing the measure “they must register with the government, appoint a treasurer, open a separate bank account, and track and report every penny that they raise and spend for their efforts,” according to lead attorney Paul Sherman.

“As a result NOM will have to comply with a panoply of burdens that Florida via its electioneering-communications organization definition imposes,” the complaint states. Among those burdens are registration, record-keeping and reporting requirements by the state.

The groups are not affiliated, but may have been similarly emboldened by a Supreme Court ruling earlier this year that overturned a ban on corporate spending on candidate elections.

Florida’s conservatives have long opposed the state’s campaign finance laws. Republican lawmakers were behind a ballot initiative last year to repeal the measure. In July, Republican governor candidate Rick Scott successfully sued to keep his primary opponent, Attorney General Bill McCollum, from receiving public money. McCollum would have received matching funds from the state once Scott had spent $25 million. Scott argued that he was being unfairly penalized for spending his money on ads, saying the matching funds amounted to an infringement on his political free speech.

The Institute for Justice’s lawsuit is the kickoff of a nationwide campaign to overturn campaign finance laws. So far, Florida is the only state the group has filed suit in. But the organization is “litigating by letterhead” in 22 other states, says spokeswoman Shira Rawlinson, meaning they are sending out letters “calling on officials to bring their laws into compliance with the First Amendment.”

According to the Institute for Justice, the plaintiffs in their case — Nathan Worley, Pat Wayman, John Scolaro and Robin Stublen — are neighbors who gather once a week to talk politics. They all felt strongly enough about Amendment 4 that they wanted to pool their money and take out a radio ad opposing the measure. But “under Florida law, any time two or more people join together to advocate the passage or defeat of a ballot issue, and spend more than $500, they become a fully regulated political committee,” according to Paul Sherman, the lead attorney on the case. And that requires registering with the state.

In the NOM case, the conservative religious advocacy group wanted to take out ads on the radio, TV and Internet, and use direct mail to target candidates for the Florida legislature. The complaint does not say which candidates or what the ads would say because NOM “does not wish to divulge its strategy at this early date.”

The complaint states that it won’t be coordinating the ads with any political campaigns or committees. The ads will all address the issue of marriage, according to James Bopp, Jr., an attorney with the James Madison Center for Free Speech, which filed the suit on behalf of NOM. He declined to give more details.

“We’re going to support candidates who support our goals,” Bopp says about the NOM lawsuit.

Bopp was one of the original lawyers of the Citizens United case that reached the Supreme Court, eventually overturning a key provision of the federal campaign finance reform law known by the names of its sponsors, the McCain-Feingold bill. At the time, Bopp said he had a 10-year plan to dismantle campaign financing regulations, echoing the goals of the Institute for Justice.

Proponents of the current system say it assures necessary transparency.

“I believe the crux of the matter is that NOM doesn’t want its donors to be exposed to the light of day,” says Brian Winfield, communications director for Equality Florida, an LGBT advocacy group. “Courts have previously ruled there is no expectation of privacy if you are taking a public stand on issues.”

Up to now, that has included paying for political ads. The plaintiffs are hoping to get rulings well before election day.

PPolitics
Rachel Maddow devoted some of last night's program to the Federal Election Commission lawsuit against a former business partner of Rep. Vern Buchanan, R-Sarasota, and a former dealership co-owned by the congressman. As our Virginia Chamlee reported last week, a judge fined the dealership $67,900 for what the Election Commission called an extensive and ongoing scheme” to funnel “secret, illegal contributions” to Buchanan’s 2006 and 2008 campaigns.
PPolitics
Senate candidate George LeMieux is set to fundraise at the Sarasota home of Jesse Biter on Wednesday. Biter, a well-connected Florida businessman, recently served as chairman of the Rick Santorum for President campaign. He has has also worked on campaigns for Mike Huckabee, Rep. Vern Buchanan, R-Sarasota and Gov. Rick Scott.