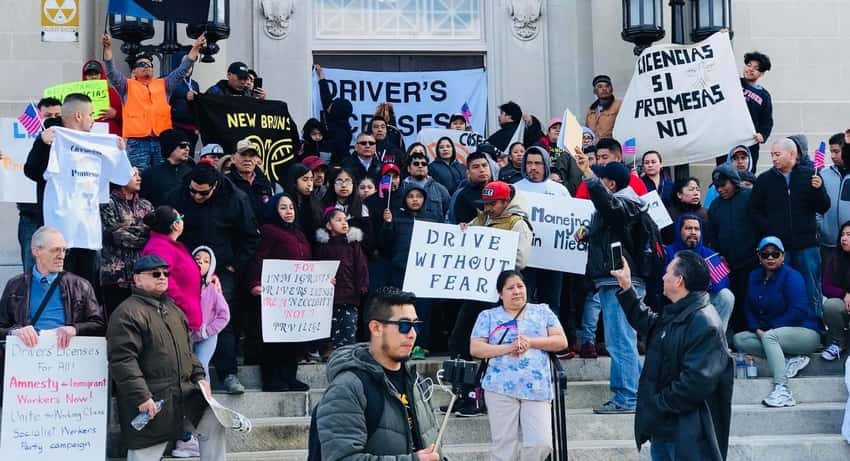 Activists rally against laws that ‘deny the legitimacy of immigrants’

The 14th Amendment of the Constitution defines citizenship this way: “All persons born or naturalized in the United States, and subject to the jurisdiction thereof, are citizens of the United States and of the State wherein they reside.” But the same Arizona legislator who proposed immigration law S.B. 1070 wants to change that, a move Florida activists are decrying.

Emboldened by passage of the nation’s toughest law against illegal immigration, [Republican state Sen. Russell Pearce] now wants to deny U.S. citizenship to children born in this country to undocumented parents. Pearce, who has yet to draft the legislation, proposes that the state of Arizona no longer issue birth certificates unless at least one parent can prove legal status.

Included in the language of the resolution is the following: “That the City Commission hereby protests and denounces any policy and opposes any law, such as the anti-immigrant law recently enacted in the state of Arizona, which encourages racial profiling which places immigrants at risk, jeopardizes public health and safety and hinders laws enforcement and health officials from obtaining the full cooperation they need and currently receive from the immigrant community.”

“In Arizona, anti-immigrant organizations want to see how far they can push,” Vinent says. “The right to an identity and to live with your family is recognized by the United Nations. The goal of the anti-immigrant movement is to go back to a U.S. that is less diverse and more white.”

A spokesperson for DREAMActivist.org tells TFI, “[Pearce] is going to be shot down, but politically this is a bold move. He knows where he’s headed, trying to convey a message that says, ‘Look, this isn’t discriminatory. We are doing what the federal government hasn’t done.’”

“Politicians are trying to ride the wave created around S.B. 1070. They are arguing about who supported the bill first to secure every vote,” says the DREAMActivist.org spokesperson.

“There is an amazing level of discrimination in this effort to pass laws that deny the legitimacy of immigrants,” Vinent says.

PPolitics
The Florida Center for Fiscal and Economic Policy (FCFEP) released a report this month warning state officials that delaying implementation of federally mandated health policy changes in the state could compound the challenges they might already face.
PPolitics
Democratic candidate for U.S. Senate Kendrick Meek is calling on the star power of former President Bill Clinton this week to help boost his