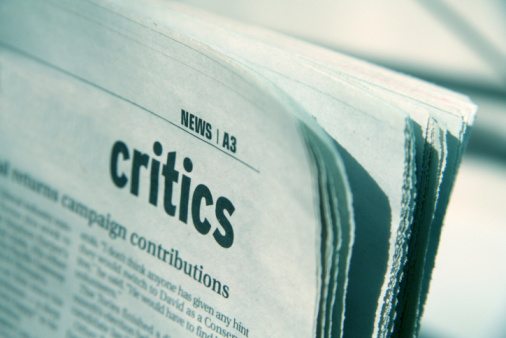 One of the most surprising and disappointing things about reaching an important goal is that many people won’t share your happiness when they hear about it. Some will even criticize your achievement. The post Criticism Is the Price of Success – Prepare for It and Profit From It appeared first on Early To Rise.
2
Shares
0
0
2
0

One of the most surprising and disappointing things about reaching an important goal is that many people won’t share your happiness when they hear about it. Some will even criticize your achievement.

This has happened to me a lot in my success-driven life. The criticism always hurts – but it hurts less now than it did when I was younger. Moreover, I’ve learned to profit from it. You can too.

What’s important, I’ve found, is not the criticism itself but how I react to it. Praise motivates me to do more of what I’m doing. Criticism – which used to make me want to quit – spurs me to examine what I’m doing and see if I can do it better.

This happened just recently after I published an article in my Ready, Fire, Aim newsletter about the economy. Two of my most esteemed colleagues read it, didn’t like it, and chastised me for bad writing. That set me aback. I consider myself to be a pretty good writer, but they made me wonder if I was really just a shallow-minded pundit of mediocrity.

After doubting myself for a few days, I set to the task of profiting from their comments. I reread what they said and made notes on those points I thought were valid. I circulated my notes to Jason, Suzanne, and Judith, my editors. That began an ongoing discussion about how we could improve Ready, Fire, Aim. And we came up with a few good ideas.

I then wrote to my two friends who were nice enough to honestly critique my article. I thanked them for helping me make the newsletter better. And I meant it.

In What Got You Here Won’t Get You There: How Successful People Become Even More Successful, Marshall Goldsmith talks about how important feedback is to success:

Feedback is very useful for telling us “where we are.” Without feedback… we couldn’t have results. We couldn’t keep score. We wouldn’t know if we were getting better or worse. Just as salespeople need feedback on what’s selling and leaders need feedback on how they are perceived by their subordinates, we all need feedback to see where we are, where we need to go, and to measure our progress.

Goldsmith acknowledges that negative feedback “can be employed by others to reinforce our feelings of failure, or at least remind us of them – and our reaction is rarely positive.” Worst of all, negative feedback can sometimes shut us down. “We close ranks, turn into our shell, and shut the world out.”

When Goldsmith was a child, his mother told him he had no mechanical skills. He went through high school believing that, and, when he was 18, scored at the bottom of the entire nation in a test given by the U.S. Army.

A few years later, a professor persuaded him to take another look at his mechanical abilities. That’s when he realized his mother was wrong, and he was “just living out the expectations [he] had chosen to believe.”

So that might be the first thing to say about profiting from criticism. Recognize that a negative comment about you or your abilities cannot damage you unless you let it.

Goldsmith says that he wasted years, convinced that he was mechanically inept. But he didn’t blame his mother. He blamed himself. “I was the one who kept telling myself, ‘You can’t do this!’ I realized that as long as I kept saying that, it was going to be true.”

Here are some useful techniques for profiting from criticism.

1. Remember that criticism is the price of success.

This group includes jealous friends, professional enemies, and habitual critics. These people get their kicks from kicking you when you are up. They want you to be down where they are. Don’t go there. Just ignore them.

3. If you can’t ignore your critics, frame your responses strategically.

Sometimes, you won’t be able to ignore your critics – if, for example the criticism is coming from your boss or your family. That’s when you need to stay calm and respond strategically.

In Self-Esteem, Matthew McKay and Patrick Fanning recommend a technique they call “clouding.” “Clouding involves a token agreement with a critic. It is used when criticism is neither constructive nor accurate. When you use clouding to deal with criticism, you are saying to the critic, ‘Yes, some of what is on your screen is on my screen.’ But to yourself you add, ‘And some isn’t.’ You ‘cloud’ by agreeing in part, probability, or principle.”

Agreeing in part – finding one part of your critic’s comments to agree with or acknowledge.

The Criticism: You’re not reliable. You forget to pick up the kids, you let the bills pile up until we could lose the roof over our heads, and I can’t ever count on you to be there when I need you.

Your Response: You’re certainly right that I did forget to pick up the kids last week after their swimming lesson.

Agreeing in probability – acknowledging that there’s a possibility your critic could be right. The chances may be a million to one against it, but you can truthfully say, “It’s possible you’re right.”

The Criticism: Starting a business now is a terrible idea. The economy is in the crapper, and you’re just wasting time and money.

Your Response: Yes, it’s possible that my business won’t work out.

Agreeing in principle – acknowledging the logic of your critic’s argument, but not necessarily agreeing with his assumptions. This clouding technique uses the conditional “if/then” format.

The Criticism: You’re really taking a chance by claiming all these deductions you don’t have receipts for. The IRS is cracking down. You’re just asking for an audit. It’s stupid to try to save a few bucks and bring them down on you like a pack of bloodhounds.

Your Response: You’re right. If I take the deductions, I’ll be attracting more attention to myself. And if I get audited, it will be a real hassle.

Helpful criticism is sometimes harsh but it’s always well intended. It’s not hard to identify it. The hard thing is to accept that it is helpful and use it to improve yourself.

In Succeed for Yourself: Unlock Your Potential for Success and Happiness, Richard Denny says, “Constructive criticism is not negative, so be enthusiastic about it. Remember, you are very fortunate if you receive it. Encourage others to offer constructive criticism.”

I make it a habit to send a personal “thank you” to anyone whose criticism has helped me do better work.

6. Solicit criticism – from people you respect – while there is plenty of time to make changes.

One of the most successful publishers I know does this regularly. When considering the launch of a new product, he sends a memo to a small group of more experienced publishers explaining his concept and asking them to poke holes in it.

By getting their criticism early, he doesn’t feel its sting. After all, it’s not his baby that is being criticized. It’s just an idea. And ideas, as we all know, are not worth anything until they are put into action.

Another benefit – and this is a big one – is that it saves him time and frustration. By getting input on an idea before he’s done a lot of work on it, it is much easier for him to make changes.