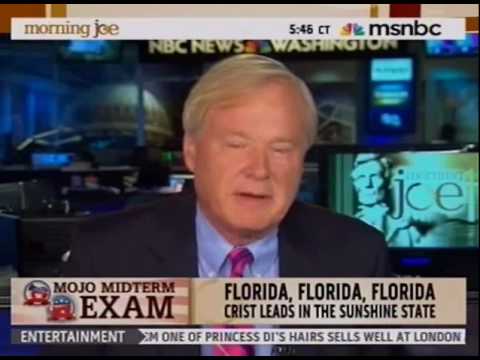 Florida Gov. Charlie Crist appeared on MSNBC’s Hardball Friday and was asked by host Chris Matthews how his opponent, former Florida House Speaker Marco Rubio, could join the GOP Senate Caucus when the minority leader — Sen. Mitch McConnell, Ky. — and several top Republican senators have called for hearings or even a constitutional amendment on birthright citizenship. (The Florida Independent has asked the Rubio campaign for his position, but he has not responded to our requests or requests from other media outlets. Rubio is the son of Cuban immigrants.)

“That would be unconscionable to me. I can’t understand it,” the Florida governor said. Matthews asked him about his own views. “The 14th Amendment ought to stay the way it is. If someone is born in the United States of America, you are an American. That is a tradition of our country. That’s the way it should always be, that’s the way it’s always been. And that’s what America is all about,” he said.

Crist attempted to demonstrate his appeal as independent during the interview. “I think people in Florida, and frankly throughout the country, they’re tired of the gridlock in Washington, D.C. … I think they want people who will to go to Washington, fight for things not because they are a Republican issue or a Democratic issue, but a good idea and a good issue,” he said. He also said that BP should be subject to a criminal probe for the oil spill in the Gulf of Mexico, and he voiced support for comprehensive immigration reform.

For the most part, Matthews went softball on Crist for the rest of the interview. Matthews compared him to Jimmy Stewart in Mr. Smith Goes to Washington. Matthews has already said on MSNBC’s Morning Joe, that “Charlie Crist is going to be the new star of the Democratic Caucus in the Senate. He’s going to be a major player in the Democratic party down the road; he’ll be a moderate Democrat, somewhere in the middle. I think he’s a very shrewd and nimble politician.” The clip has been propagated by Republican opponent Marco Rubio’s camp.

Georgia-Pacific and environmental activists face off over St. Johns pollution

PPolitics
Mat Staver, the founder of a Christian legal group known as the Liberty Counsel, has switched his position on a bill currently making its way to the governor's desk. The bill, which is sponsored by state Sen. Gary Siplin, D-Orlando, would allow state school boards to adopt policies allowing K-12 students to give inspirational messages, including prayers, at any school event.
PPolitics
As health care services in Florida face deeper cuts to their state funding, a network of crisis pregnancy centers has continued to maintain its $2 million in annual state funding, despite serving fewer patients and offering fewer services than either Planned Parenthood or Healthy Start.