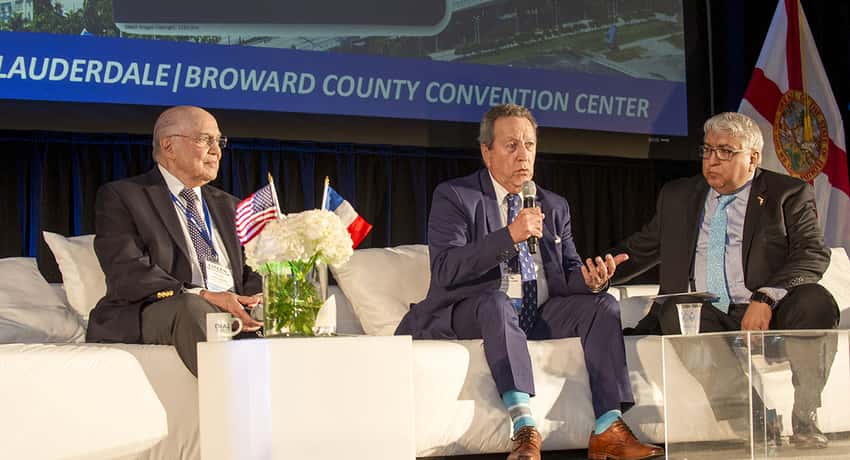 Democrat Angelo Castillo, a current Pembroke Pines city commissioner and the executive director of Broward House, is the only Hispanic candidate running for the Broward County Commission District 8 seat, and he is pressing the Hispanic community to support him. As The Florida Independent previously reported, he told the Spanish language weekly El Sentinel, “Hispanic residents of Broward have in their hands the power to put one of their own in the County Commission.”

“[The] Hispanic vote has been depressed. Hispanics need to get out and vote. They can complain, but if you don’t vote you don’t get represented,” Castillo says.

According to Castillo, District 8 voters are pretty much evenly distributed in the white, black, and Hispanic communities. “Black voters and Jamaican voters particularly come out in very healthy numbers,” he says, pointing out that overall voter participation is low.

U.S. Census Bureau data shows that 24 percent of Broward residents identify as Hispanics, “yet we only have 4 elected officials,” says Castillo. “If I’m not elected there will only be three.”

“There are several divisions in the Hispanic community, because some are Republican or Democrats, because of the country where you come from. But that is silly,” Castillo says. “They have to see the issues that unite us. For example, there are 288 public schools in Broward and maybe 10 Hispanic principals. We are underrepresented at all levels of government.”

“In the last election the highest-rated judge through a survey among judges and lawyers was Julio Gonzalez, but he was defeated by a non-Hispanic,” Castillo adds. “This can be due to the fact that judges cannot campaign like other candidates, but a poorly funded candidate with a more traditional American surname defeated incumbent Judge Catalina Avalos.”

Avalos had been appointed by former Gov. Jeb Bush and, despite strong backing and sufficient funds, lost to Ian Richards — a black attorney born in Jamaica.

The fact that many Hispanic residents are not citizens impacts voting as well, which brings up the question of immigration policy. “We have sent out mixed messages throughout the history of the United States: ‘Come here,’ and when people come they get chastised for taking jobs real Americans need. That is nothing new.”

Castillo says the Lake Worth city commission resolution on S.B. 1070 is one more occasion for opinion, adding:

I believe this current round of immigration discussion was brought about by Karl Rove to deflect attention from Iraq. I have seen no greater arrival of immigrants. We should guard our borders, and have immigration rules, and get those already here on the path of residency and citizenship.

But when the conversation turns to a particular group, that on occasions has been invited here by corporations to do migrant labor work, it raises concerns when that presence gets highlighted in times of economic recession. This crisis didn’t come from the border; it came from Wall Street.

In the current economic situation jobs is a top priority for Castillo:

Cities and counties have to figure out ways to stimulate local economic growth. We have to go back to manufacturing, to stop the widening gap between the haves and the have-nots.

In certain areas of Broward you have 16- or 18-percent unemployment. You have three families living in one household, a school district that graduates about 60 percent of its students. When was the last time you had a conversation with an elected official about these issues?

PPolitics
Last week, lawmakers received grim news that Medicaid could cost the state more than expected in the upcoming year — numbers that provided the backdrop for continuing discussions about how to overhaul the program.
PPolitics
Miami-Dade County Commissioner Natacha Seijas, a strong supporter of the Miami-Dade county wage theft ordinance approved in February 2010, proclaimed Nov. 18 as a Day Against Wage Theft. This month, fellow Republican state Rep. Tom Goodson of Titusville filed a bill that would preempt any local wage theft ordinance. The bill says federal and state laws already protect workers and employers against wage theft.