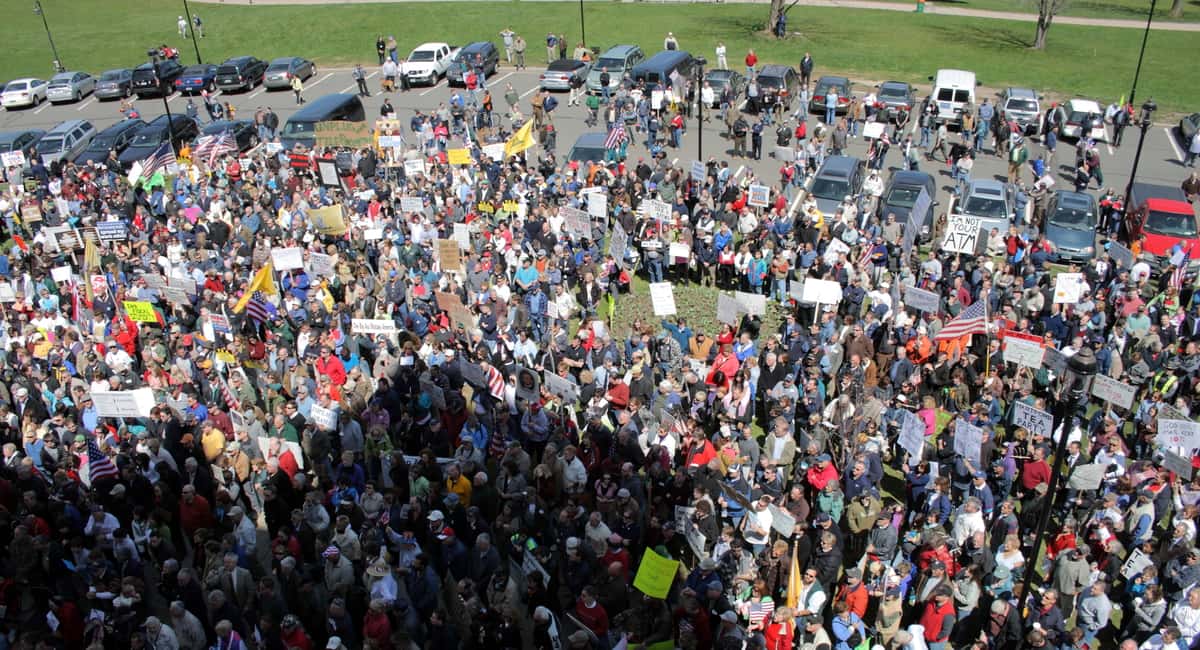 The lineup of speakers at Saturday afternoon’s “Forward to the Constitution” Tea Party rally in St. Augustine read like a who’s-who of Republican candidates in statewide elections.

Candidates from other parties or no party at all who said they embraced the movement seemed overshadowed by Republican heavy-hitters Marco Rubio, Pam Bondi, and Rick Scott.

Troy Stanley, an independent candidate for Florida’s Fourth Congressional District, said he was excited for the opportunity to speak to potential constituents at the event. He, along with a handful of other midterm-election candidates, had a booth with campaign information and other paraphernalia. He said he was disappointed that he wasn’t given time to address the nearly 4,000 attendees from behind the microphone.

“[The Tea Party] has visible, vocal, representative people involved … and underdog candidates are winning. It’s not just about the Republican party,” Stanley said.

“People are disappointed with politicians in general right now, but they hate Democrats a little more than they hate Republicans,” he said, noting that Tea Partiers tend to favor Republicans, and the party is trying to use the movement to its own ends.

“It’s beautiful, but it’s diverse,” he said of the movement. “I think that people are going to start reading the Constitution and realize that neither party is following it.”

There was a sense of rebellion in the crowd that proudly displayed their opinions on T-shirts and posters proclaiming “Limit terms to only one” and “Vote Progressives out in 2010!” Though they are putting the majority of their support behind Republican candidates, like those featured at the event, many Tea Partiers say they are not content to ride anyone’s coattails.

John Lacquey, president of the North Central Florida 9/12 Project, said his group is non-partisan and therefore does not support specific candidates.

Lacquey, an outspoken, colorful man with a penchant for the patriotic idioms with which the Tea Party has become associated, said that he was partly grateful that Obama got elected.

“The Lord put Obama in office to motivate us, and he’s done a great job,” he said. “Sometime in November 2009, a grassroots campaign began to form to restore America. We identify ourselves as Conservative Constitutionalists and we believe that the government tries to kill business … If you’re in doubt, shout ‘em out.”

Rally attendees were mostly receptive to the rhetoric of candidates like Scott, the Republican gubernatorial nominee, who promised to lower property taxes by 19 percent. Drawing on his status as a political outsider, Scott has long courted Tea Party support and often received it.

Scott cited Christine O’Donnell’s recent upset primary win in Delaware as an example of how groups like those hosting the rally are “changing the country.”

Bondi, who’s running for Attorney General, spoke forcefully about her “nearly two decades” as a Florida attorney, and elicited several cheers when she told the crowd that she is proud to have prosecuted two people currently on death row. The fervor grew when she referenced her side job as a political analyst on Fox News: “Fox is not fair and balanced, they’re right. Without my friends … Sean Hannity and Glenn Beck, we would not know both sides of the story.”

Bondi promised to take a hard look at the healthcare bill, saying “I take on murderers and I will take on the federal government in this healthcare takeover.”

“The first thing my opponent will do issue for higher taxes. The second is to get rid of the healthcare lawsuit.” Bondi, referring to Democrat Dan Gelber. She said President Obama and House Speaker Nancy Pelosi were “out of control,” and vowed to do everything in her power to “protect Tenth Amendment rights.”

Organizer Larry Sheffield consolidated 14 local Tea Party groups for Saturday’s rally, as well as an upcoming “get-out-the-vote” motorcade event, tentatively scheduled for October 30. Sheffield says the motorcade will be a “60 mile-per-hour” parade, of sorts, and will run from Gainesville to Jacksonville.

Sheffield said his group consists of highly diverse members, some who are unemployed, and some who are doctors. When asked whether or not he felt that Republicans were looking to co-opt Tea Party members, he seemed amused.

“The problem with politicians is that their allegiance is to either Democrats or Republicans,” he said. “We aren’t looking to be co-opted by any party. In fact, we’re trying to co-opt the Democratic Party. They just don’t know it yet.”

PPolitics
Read More
The 2011 National Right to Life Convention kicked off in a riverfront Hyatt in Jacksonville this morning. Though a scattered group of protestors picketed the event outside, the mood inside the conference center was optimistic and upbeat.
PPolitics
A Florida judge has ruled that the Patient Protection and Affordable Care Act is unconstitutional, a victory for the 26 states that joined in a suit challenging the law in federal court.