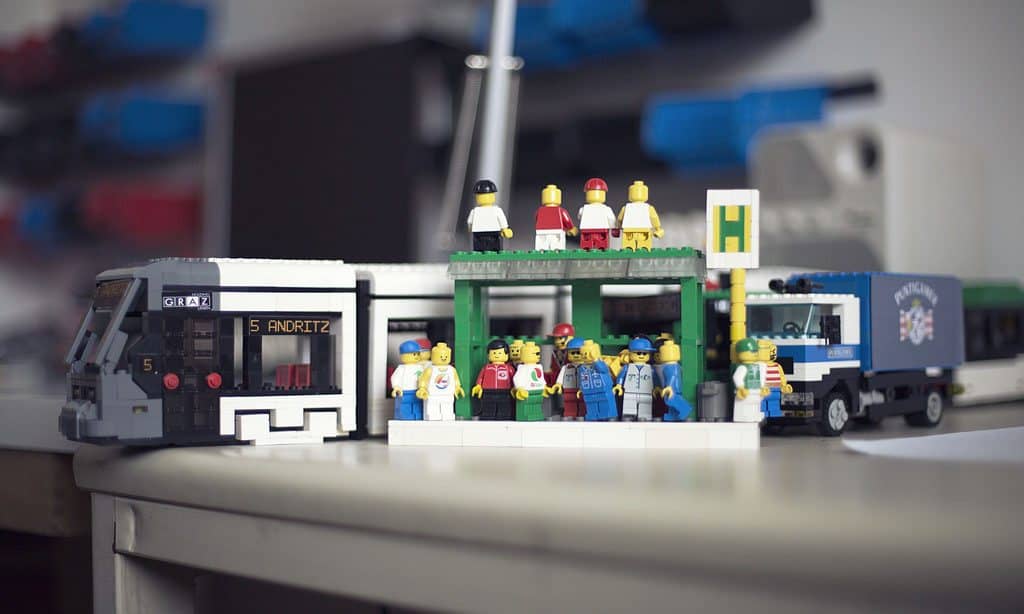 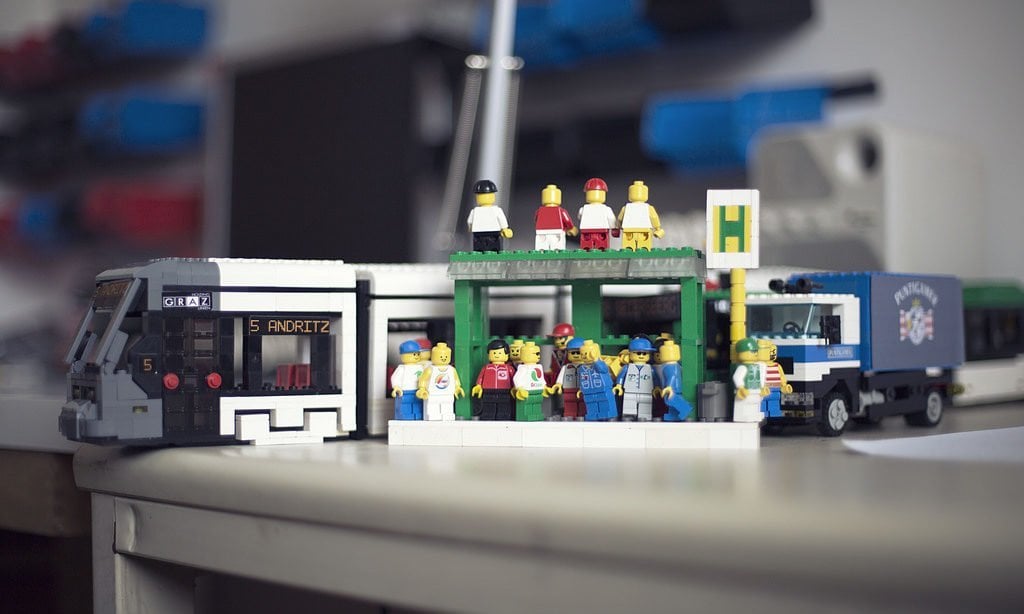 City building sets are exceptionally playable and include tons of accessories to increase the detail and fun factor. Even though the City building sets come with easy to follow instructions to build exact structures, vehicles, and more, like all LEGO sets they can be rebuilt in to completely original and creative projects – perfect for imaginative makers. There are plenty of choices in City building sets, and they can be combined to build the ultimate LEGO City. 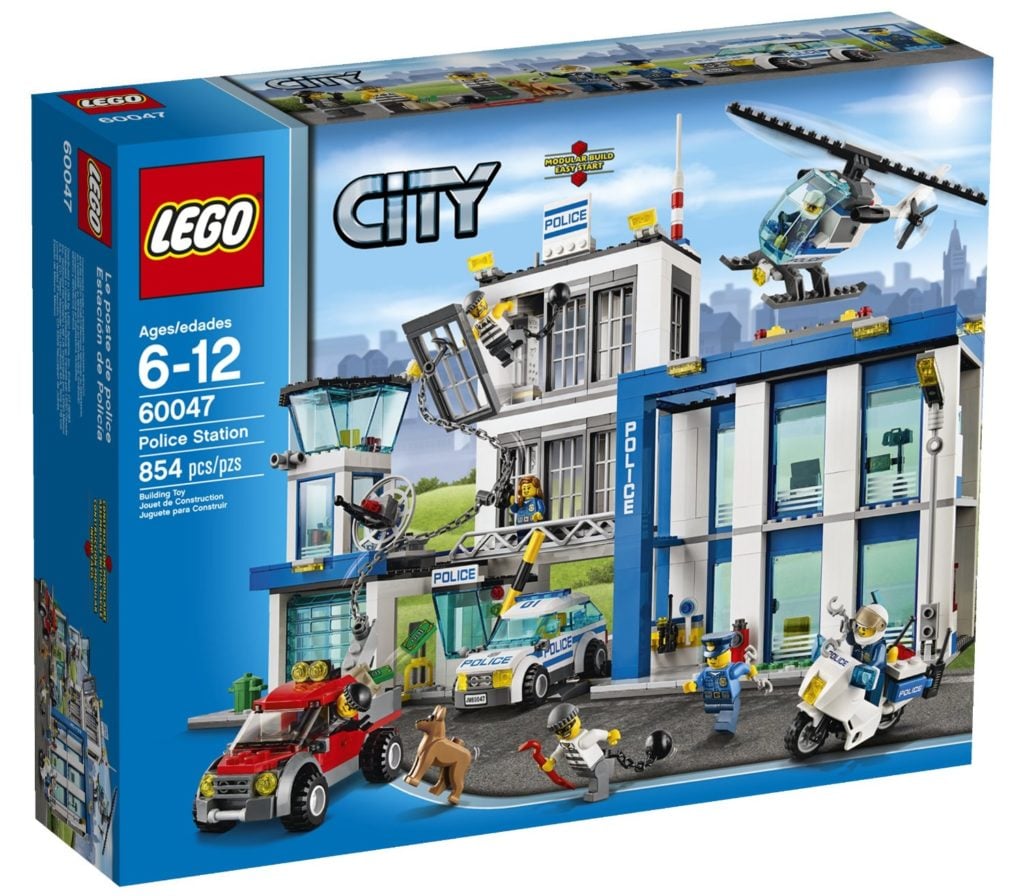 The LEGO Police 60047 Police Station is the perfect set for experienced LEGO enthusiasts and newcomers alike. Reviewers agree that if you are looking to choose only one of LEGO’s popular City building sets, that this should be it. It’s a detailed set with lots of pieces, and offers hours of building fun. With several individual sections to build like the police station, control tower, and garage, the building fun can be spread out over several days. In addition to 854 building pieces, this set comes with lots of accessories like seven mini figures (policemen, policewoman, crooks, and even a police dog) and four vehicles (police car, helicopter, motorbike, and tow truck). When fully assembled, the set has everything a fully functioning police station needs. 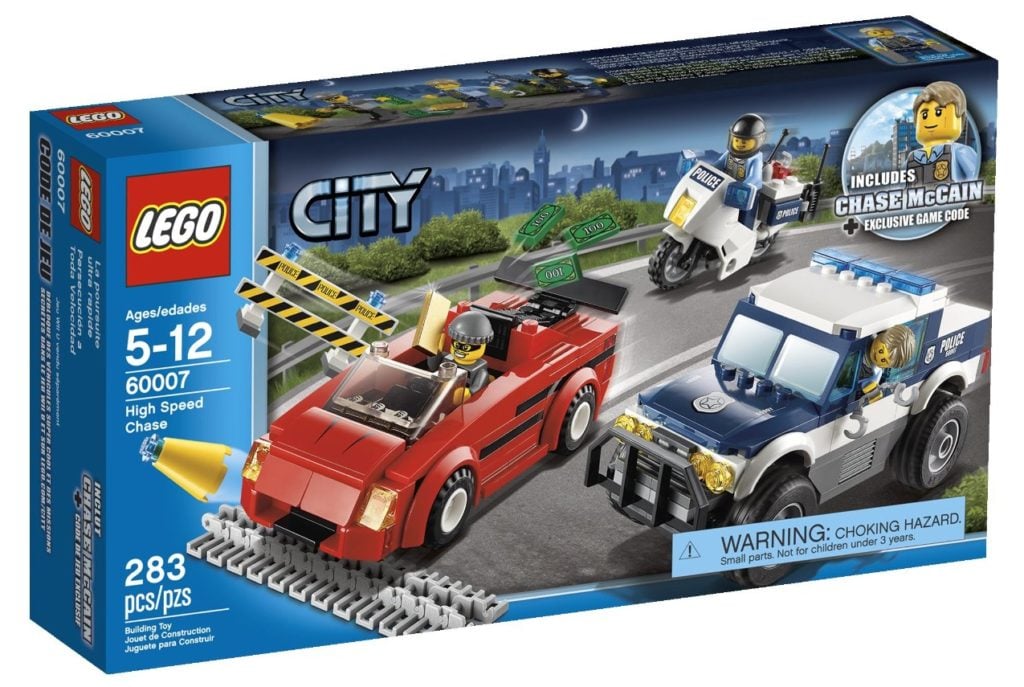 A great addition to the Police Station and any LEGO cities, the LEGO Police High Speed Chase Building Set 60007 adds exciting playability. It is also an essential add-on to the popular Wii U game, LEGO City Undercover, and purchase of this set unlocks the vehicles in the game. One of the simpler City builds, this set is a good beginner set, especially for younger children transitioning from Junior LEGOs to the more complex builds. It comes with three fun mini figures: Chase McCain, burglar, and elite motorcycle officer. The mini figures pilots an elite police vehicle, elite motorcycle, and sports car. Additional accessories include spike strip, police barrier, traffic cone, gold bar and money bills. 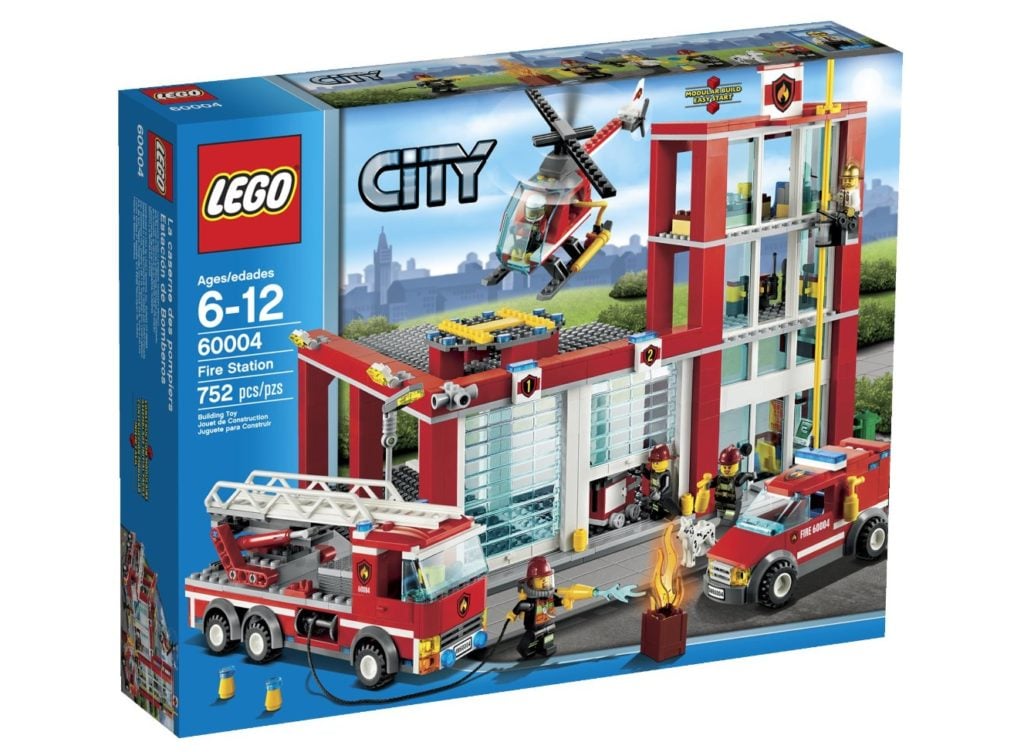 The LEGO Fire Station 60004 offers another fun major building for your city. Children ages six to twelve will enjoy assembling the completely outfitted fire station that includes tons of accessories. Even though the set is recommended for kids in a particular age range, many parents report that younger children can put the set together with the help of a patient adult. Major components are the actual fire station and several vehicles like a fire truck, van and helicopters. There are plenty of mini figures to pilot the vehicles and man the station. There’s even the all important fire station dog. A computer, flames, furniture, tools, and more add playability to this awesome set. 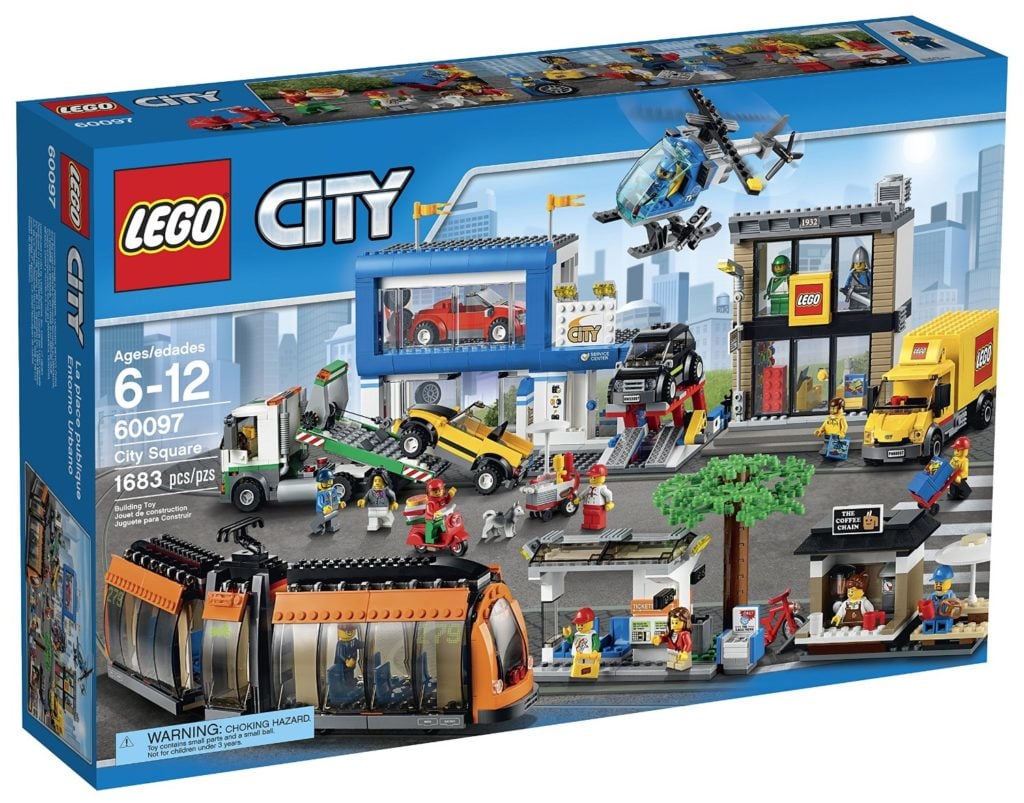 Build out a major area of the city with the LEGO Town 60097 City Square Building Kit. This set has lots of town necessities like a store, coffee stand, tram, tram station, car dealership, lots of vehicles, and SO MUCH MORE. There’s so much to this set, in fact, that users recommend using plastic bags or bins to store the many parts so that they don’t get lost during playtime. Drive the delivery truck, tow vehicles with the tow truck that uses an actual working winch, and pilot the tram around the city’s center. 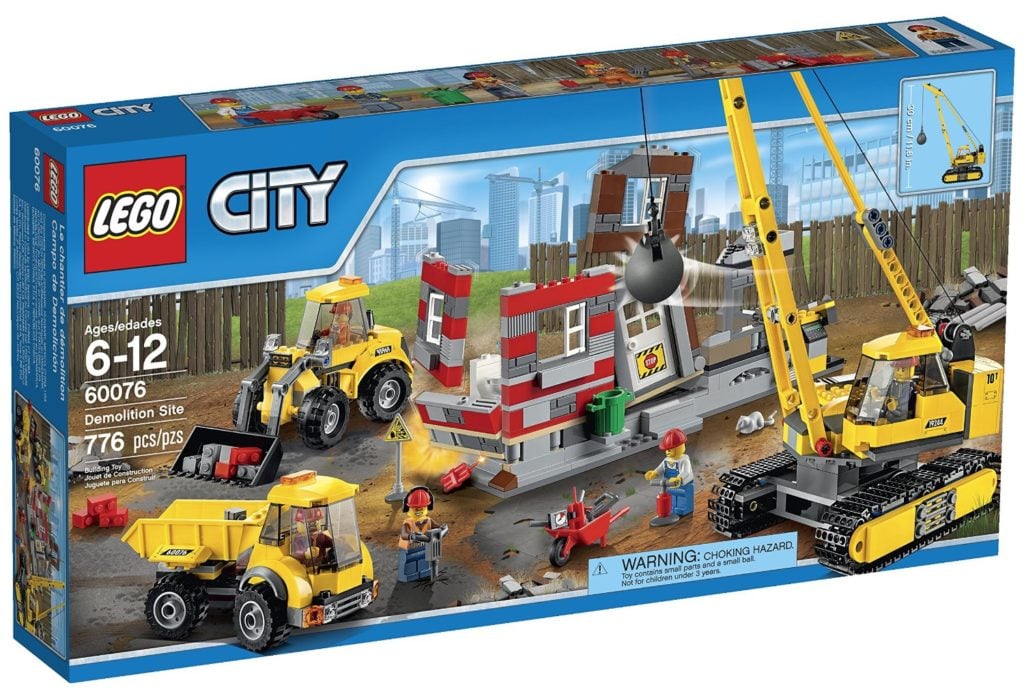 Lots of kids love playing with construction vehicles and the LEGO Demolition Site combines the fun of LEGOs with cool vehicles like a crane with a moveable jib and wrecking ball, front-end loader with a moving bucket, and dump truck with a working bed. Use the pieces to build part of a building and tear it down with the wrecking ball helped by tons of accessories like dynamite, garbage can, ear protectors, and more. Then build it back up and tear it down again! The Demolition Bulldozer and Demolition Service Truck are great add-ons to this set. 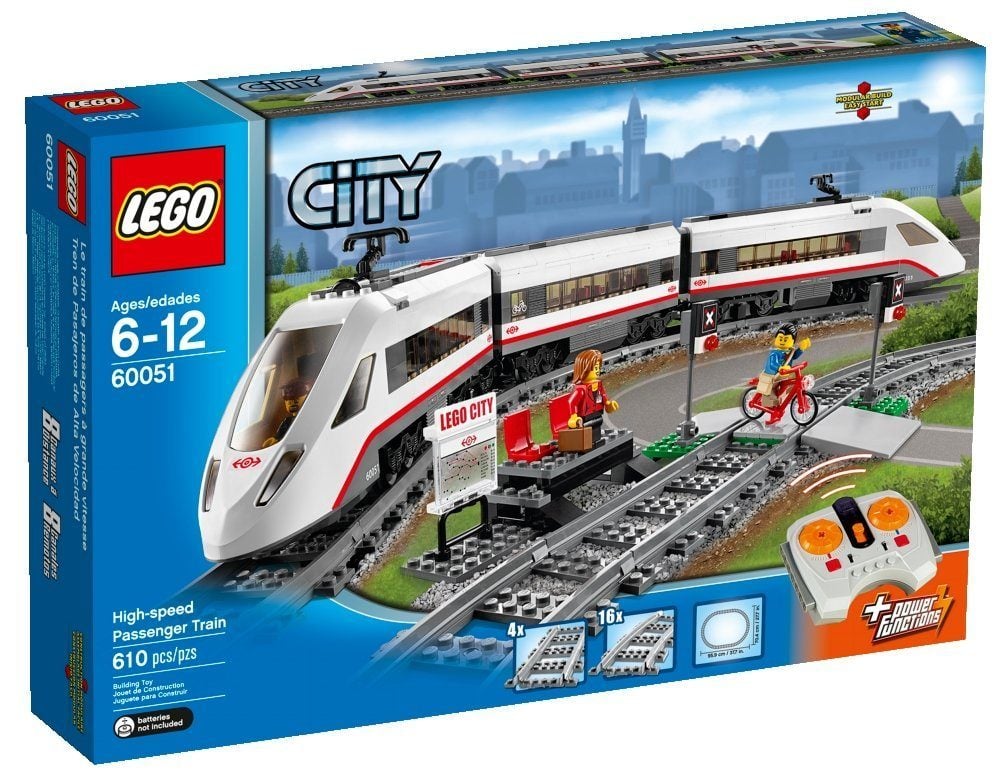 The LEGO Trains High-speed Passenger Train is a fully functioning train set, perfect for LEGO fans. There’s a complete circular track, and this cool looking passenger train goes around with the help of the 8-channel, 7-speed infrared remote control. There’s even a way station with a small platform with two seats, map of train services, warning sign, lights and a crossing for the mini figure on a bike. This set works great on its own, but many users recommend expanding your train set with the Flexible Tracks and Switch Tracks. 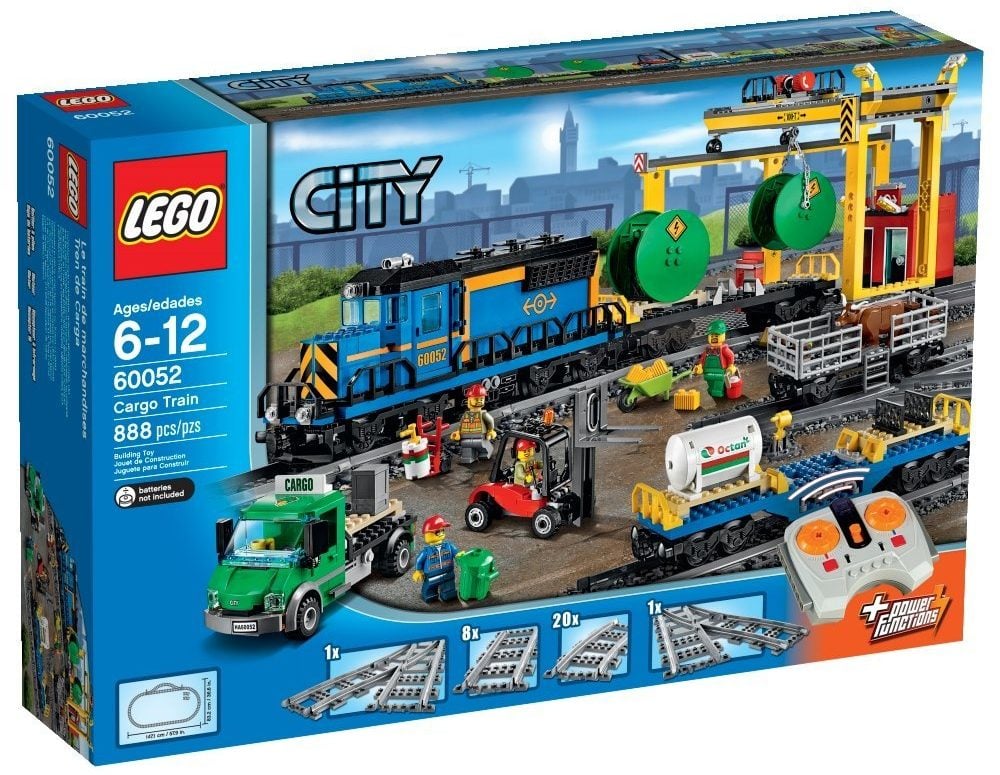 If your little builder is more of a cargo train fan, you’ll want the LEGO Trains Cargo Train 60052 Building Toy. This is another motorized train set with lots of super cool accessories. Keep track of the train and all of its precious cargo at the train station with office, use the sliding overhead crane with hook to move cargo to and from the train, load cattle on the wagon and hook to the other cargo wagons for transport, and distribute your goods throughout your LEGO City. There are mini figures to operate the equipment and plenty of cargo to be moved. 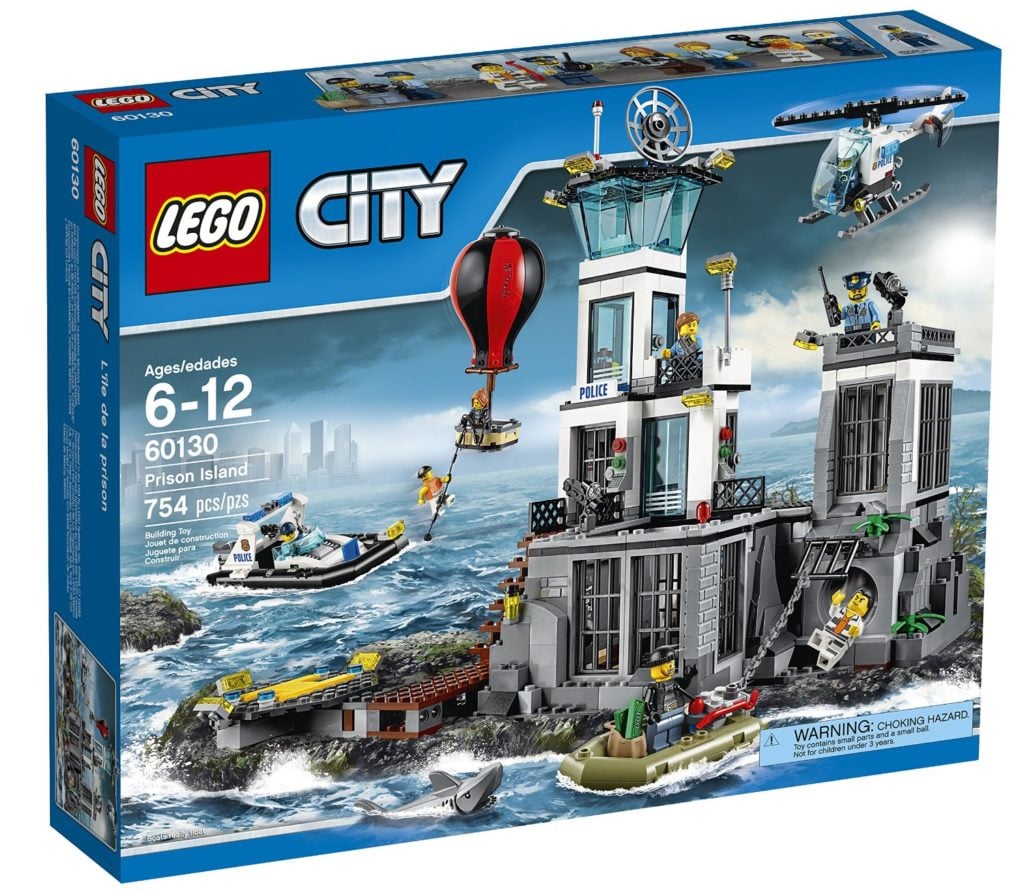 Maybe your City has some criminals that need to be put away for good. Capture them, and lock them up and throw away the key on the LEGO Prison Island 60130. In addition to the detailed prison with helipad, watchtower, and more, this set includes a helicopter, police boat, crooks’ boat and a hot air balloon. Even though this island looks secure, there are places for criminals to escape, and players are going to need all of those vehicles to round them back up successfully. Those crook mini-figures better be careful, though. There are even sharks! 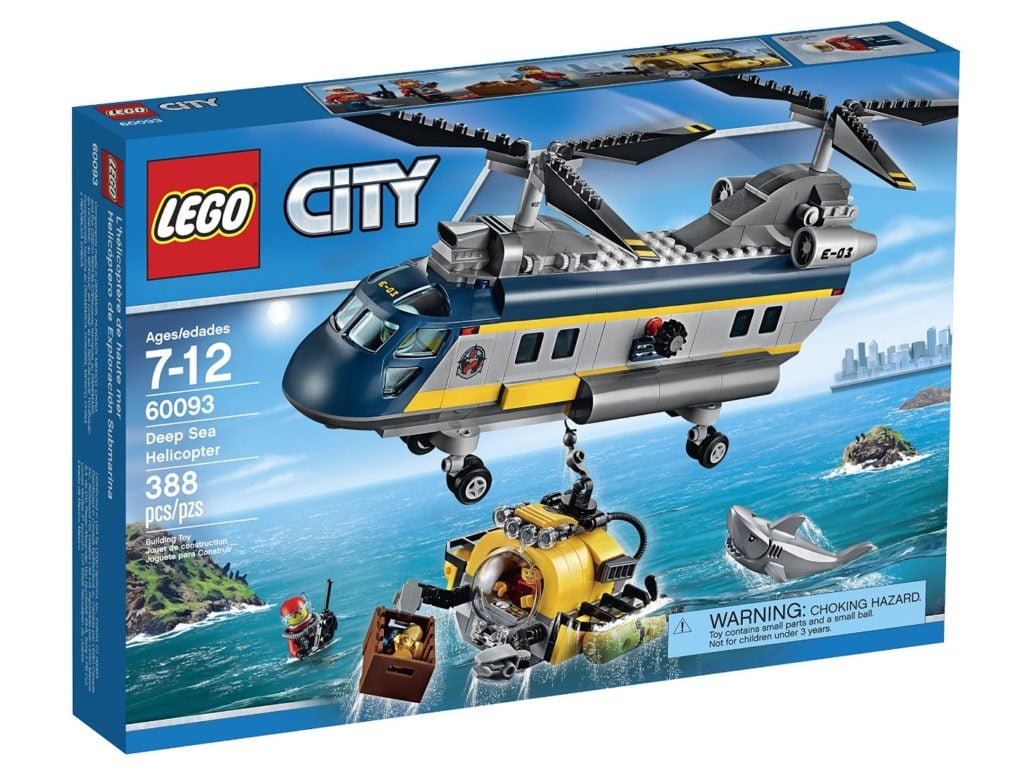 Explore the seas of your coastal City with the LEGO City Deep Sea Explorers 60093 Helicopter. Use the double rotor helicopter to transport the submarine to the middle of shark infested waters, use the working winch to lower it, and let the exploring begin. Not just an accessory pack, this is a building set with 388 LEGO pieces, so there is plenty of building fun. Reviewers of this set report that it’s a fairly easy build and should take only a few hours.

We would love to hear from you! Tell us about your favorite LEGO and LEGO City building set in the comments below.

Cortana for Xbox One Finally Released: Your Personal Gaming Assistant 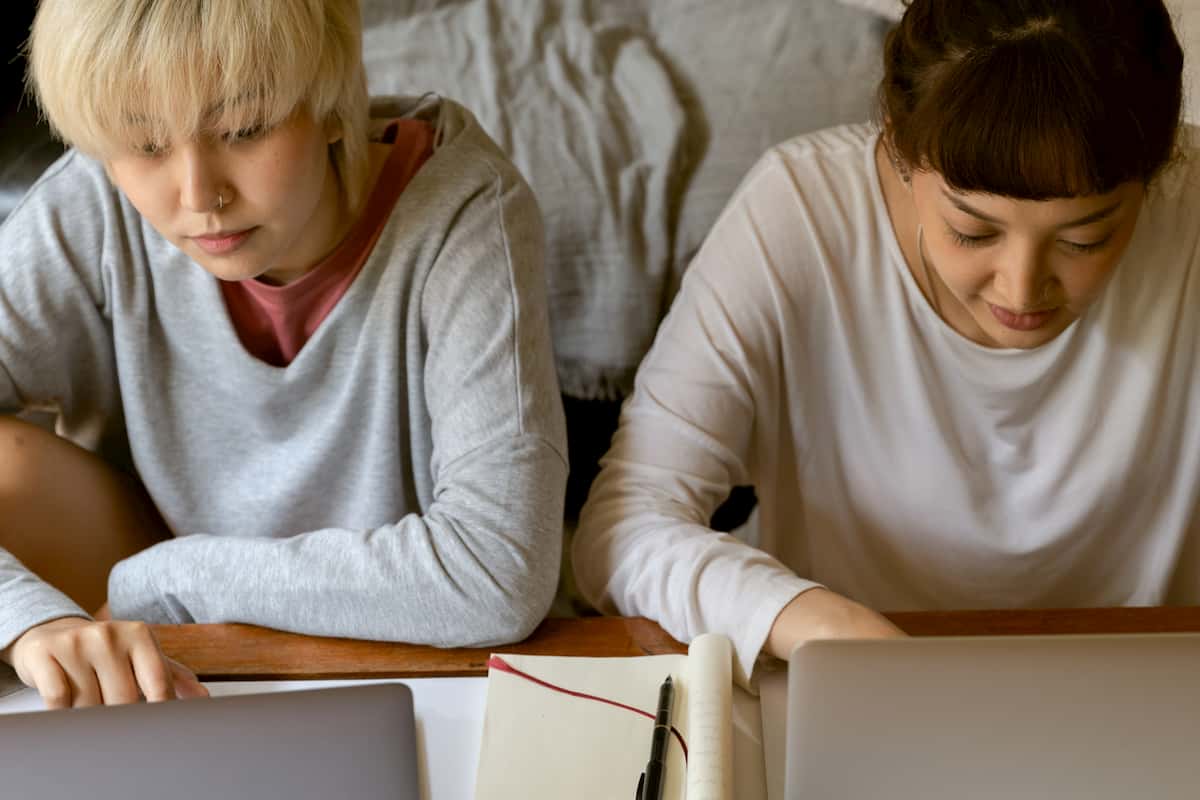 Read More
Table of Contents Hide In this article, we are going to discuss about the Social Emotional Learning And…
BBusinessEducation